The 8 Most Explosive Sour Cocktails

Sour cocktails have exploded on the cocktail scene ever since drinking has become more about taste than it has about, well, getting loaded. These are 8 of the best sour cocktails you can currently do yourself the favor of trying.

Perhaps one of the most popular tart cocktails amongst barflies apart from the Whiskey Sour, the Amaretto Sour on the other hand promises to satiate taste buds with one swift swig of this deliciously smooth creation. If you find yourself with a left-over bottle of Amaretto after explorations in the baking world, give this renown cocktail a try or make it for your guests! You’ll need 1 ½ oz Amaretto liqueur, 1 oz simple syrup, ¾ oz fresh lime, and a maraschino cherry for good measure. Take those ingredients, combine in a shaker filled with ice and strain over your cherry.

Hunter S. Thompson ate a grapefruit every morning for breakfast. Don’t know who Hunter S. Thompson is? Go back, read The Rum Diary or Fear and Loathing in Las Vegas and come back here a whole new person. Grapefruit has some amazing benefits as well as an explosive flavor. Marry that with whiskey and you have yourself a recipe for success. Take 2 oz Simple Syrup, 2 oz fresh grapefruit, 4 oz Bourbon or Rye Whiskey and 1 oz of Elderflower liqueur and combine in shaker. Strain into a rocks glass with ice and sit back, light a cigarette and let the eerie sounds of the night unwind.

The Cinnamon Maple Whiskey Sour is an obvious slight variation of the infamous Whiskey Sour. However, there is nothing “slight” about the taste of cinnamon and maple. The taste of those two flavors have about as much personality as cocktail ingredients can have. Not to mention I just got back from the Canadian Rockies in a small town called Banff and am really on this maple and whiskey train. The taste is smooth and full and seriously something to consider during the colder months of the year. Grab 2 oz of your choice of Bourbon or Whiskey, 1 oz fresh lemon juice, 1 egg white (optional), 1 oz maple syrup and a pinch of ground cinnamon for good measure. This cocktail will make you feel as though you’ve just come off the cold streets of Banff and into a small saloon for something that will warm your soul.

It seems like there may be some sort of running thread forming with the nature of these cocktails…something about writer’s and their vices, perhaps? Either way, writer’s drink so they must know a thing or two…or three about good drink. Take Ernest Hemmingway for example. The man literally has a cocktail named after him. And delicious one at that. This cocktail has a few unique ingredients that can be tricky to find but I promise that if you’re able to or find yourself in a swanky, low-light attic somewhere off a back alley in New York City you won’t be disappointed in ONE of Ernest Hemmingway’s legacies. Combine 2 oz white rum, ¾ oz key lime juice, ½ oz grapefruit juice, ½ oz Maraschino Liqueur, and 2 tbsp simple syrup. Shake, shake, shake and drink until you begin to hear the music, as it was.

One of my absolute favorite cocktails of all-time. The only caveat, I’m allergic to Penicillin…but not the alcoholic form. This cocktail is surely an acquired taste. That’s because of the Islay scotch and its extreme spirit-forward, burnt tire taste. But boy, after one or two of these, you’re rockin’ on a Saturday night. The Penicillin is for anyone who loves the taste of scotch but can also appreciate a craft cocktail in all its glory. Take 2 oz Blended Scotch, ¾ oz fresh lemon juice, ¾ oz honey-ginger syrup and ¼ floater of Islay single-malt scotch (Laphroaig is easiest). Enjoy the complexity the potent spirit flavor as well as the pungent waft of ginger and honey.

A sour cocktail list wouldn’t be worth its weight in any arena without the Pisco Sour somewhere on the list. Invented in Lima, Peru by the American bartender Victor Vaughen Morris sometime in the early 1920’s, the Pisco Sour has quickly gained it’s popularity as one of the most prolific sour cocktails sweeping the craft cocktail scene. Ingredients include 2 oz Pisco, 1 oz Simple Syrup, ¾ oz Lime Juice, 1 Egg White, 2 to 3 Dashes Angostura Bitters on top for a beautiful, well-rounded and tart cocktail that’ll send your taste buds shooting out the side of your mouth. 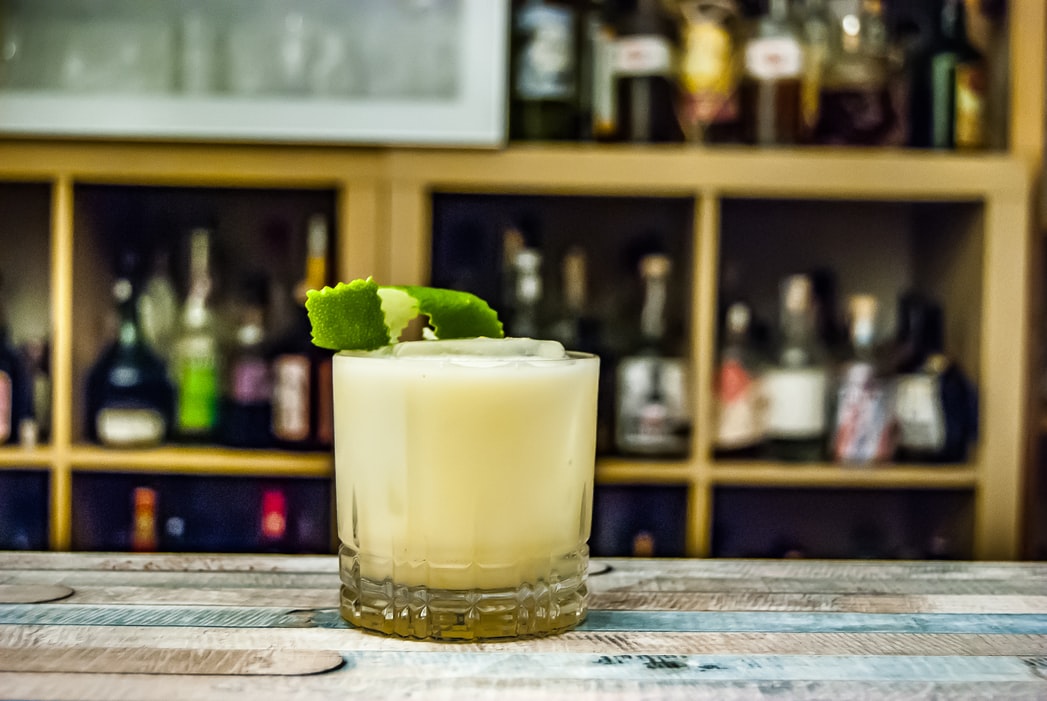 Ah, the Gin Fizz. A simply beautiful cocktail that packs a wallop to anyone choosing to drink it. The Gin Fizz is light and sour with prominent citrus notes that doesn’t shadow the gin but rather lets it stand on its own pedestal. Because the spirit taste is more obvious in this cocktail than all the rest, using good quality liquor is very important because “bad gin” can ruin just about everything. You don’t need to go out and break the bank on a bottle of gin, but I’d recommend trying to find something with a potent and clean juniper or botanical taste to it. I recommend Spring 44 as its sure to leave smooth taste on your pallet.

Who knew that there was more than just whiskey used to make a delicious sour cocktail? Well, sure. For example, there’s tequila as well gin and pisco. And this cocktails growing popularity undoubtedly came about when some unknowing person went strolling into a bar for a sour cocktail made of something other than whiskey. What could I possibly drink that’s sour other than the whiskey sour, they thought. Well, my friend, how about something high and mighty with tequila. Everyone likes tequila or will drink it at least. And some are absolutely obsessed with anything and everything tequila. So, it would seem wrong not to have a sour cocktail included hear that embodies the sour spirit of tequila. Take 1 ½ oz Tequila or Mezcal if you prefer your sour cocktail with a little smoke flavor to it, 2 oz fresh pineapple juice, ½ tbsp agave, ½ lemon juiced, 1 egg white, and some ice. Combine the ingredients into a shaker and served into a coupe glass if readily available. Who said something about margaritas?