10 Iconic Cocktails Every Gin Lover Must Know About

Gin has been around for a long time, giving the bartenders of the world opportunities to create many exciting cocktails. Gin has changed and evolved throughout history, gradually becoming the drink we know today.

The name gin has evolved from a Dutch word genever – a name for the juniper-flavoured alcohol drink originating from Netherlands and Belgium. There is a big misconception going around, which credits the Dutch physician Franciscus Sylvius with the invention of genever in the mid-17th century. In fact, the earliest mention of genever was recorded as early as 13th century in a Belgian encyclopaedic work ‘The Flower of Nature’. From the early times to the beginning of the 19th century, gin has also been considered a remedy for kidney and stomach diseases.

Traditionally known as a British drink, gin in fact arrived in the UK in the late 17th century, as the Dutch prince William of Orange, took the English throne. The government then did not impose any taxes on distillers and allowed unlicensed production of the spirit, which made gin insanely popular among the poor. However, the tightening of the law in the mid-18th century prohibited unlicensed distillation. This led to the emergence of the new sorts, such as London Dry Gin. The new gins were stronger and clearer, as the quality of ingredients improved and the drink started going through multiple distillations to ensure sanitary conditions. This was when gin became glamorous again.

The original genever was made by re-distilling malt spirit with juniper, anise, caraway, coriander, and other botanicals. By contrast, gin production today uses neutral grain alcohol which is then flavoured with various herbs.

Different brands of gin use a range of additional flavours, including citrus peel, cinnamon, almond or liquorice. For instance, Tanqueray 10, the more elite gin compared to the regular Tanqueray, incorporates more botanicals into its distillation process. The popular misconception is that 10 in the title actually stands for the ten different herbs used in the preparation. However, there are only four extra ingredients (fresh white grapefruit, fresh lime, fresh orange, and camomile flowers) added to the four original botanicals (juniper, coriander, angelica, and liquorice), making it just eight flavours in total.

Having explored a little bit of history and nuances of gin-making, let us have a look at the top 10 gin cocktails every connoisseur must try

Gin mixed with tonic is a traditional English cocktail and the one that truly reflects the national drinking habits. G&Ts were introduced as a cure to malaria during the British Empire rule, based on the belief that tonic could act as an anti-malaria agent.

Nevertheless, gin and tonic today is a regular order at a pub on a Friday night. Drinkers can choose from a variety tonics and garnishes to match different sorts of gin. These can include citrus, berries, basil, and even chilli. For example, Hendrick’s gin is traditionally served with a slice of fresh cucumber. This choice is explained by the fact that Hedrick’s distillation process involves cucumber, and these notes are nicely complemented by a fresh slice in the drink.

The classic martini is a gin-based cocktail. This simple but classy drink is made with only two ingredients – gin and vermouth.

James Bond’s iconic phrase “shaken, not stirred”, known from both Ian Flemming’s books and Bond films, reveals some interesting facts about the agent. A shaken martini will result in lower alcohol level, which may be a sign of Bond being especially susceptible to stronger drinks. Furthermore, shaking will make the drink cloudy and foamy, therefore less aesthetically pleasing. Possibly, Agent 007 had more important problems than the look of his drink.

A simple aperitif, made with one part gin, one part red vermouth and one part Campari has long been an all-time classic. Negroni is considered to be the drink that is ‘not for everyone’, due to the stronger alcohol content and bitter taste. However, the vice president of Campari suggests that this exclusivity might be the reason for it being so popular in the long term.

The name of the cocktail comes from its geographical origin combined with its looks. Long Island Iced Tea does indeed look like an iced tea and even tastes like one.

Long Island is made with a mix of gin, vodka, tequila, white rum, and triple sec, topped with a splash of Coca-Cola and garnished with lemon. There are different variations, including fruity, tropical or just stronger versions of the drink. 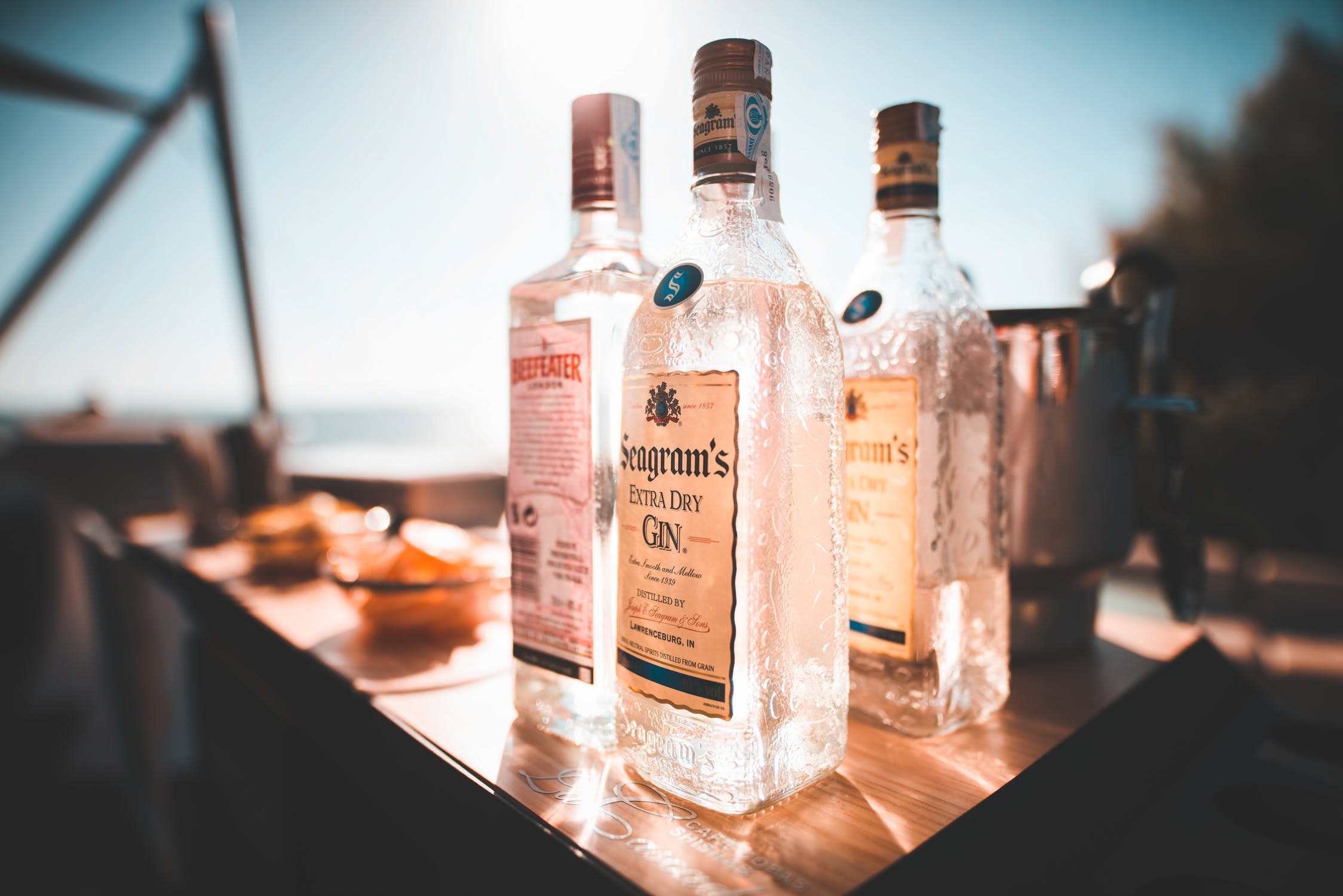 Being one of the more traditional gin cocktails, Tom Collins dates back to the 19th century, when it appeared in the edition of Jerry Thomas’ Bar-Tender’s Guide of 1876. Tom Collins quickly won over the hearts of New Yorkers and then the rest of the US. Today, the cocktail can be found on almost every respectable bar drinks menu under the ‘all-time classics’.

The original recipe suggested the cocktail must be made with gin, lemon, syrup, topped up with soda water and served in a tall glass. While the sort of gin was not specified, historians supposed the cocktail’s name pointed out to the Old Tom gin as the preferred liquor.

This cocktail was invented by a Singapore bartender Ngiam Tong Boon in the early 20th century. A sling is an American term used to define a strong alcoholic drink mixed with water and sugar.

There is a lot of debate when it comes to the original ingredients of Singapore Sling. For instance, Savoy Cocktail Book of the 1930s suggests the cocktail is made with dry gin, cherry brandy, lemon juice and soda. Other recipes may involve more ingredients, such as grenadine, pineapple, orange or lime juice, Benedictine, Cointreau, Cherry Herring and Angostura bitters.

Yet another gin classic, Gimlet is a simple cocktail typically made with a dash of lime juice, syrup and soda. Gimlet is served in a standard cocktail glass, just like the traditional martini. The recipe allows for the gin to be replaced with vodka.

Hugo Ensslin, a bartender who worked in the Hotel Wallick on Times Square, was credited with the invention of Aviation cocktail in 1916. The original recipe suggested a splash of Crème de Violet, giving the cocktail the unique light-blue colour, appropriate to its name. The rest of the ingredients included two parts of gin, one part of lemon juice and two dashes of Maraschino cherry liquor.

Interestingly enough, the influential Savoy Cocktail Book suggested an alternative recipe, removing Crème de Violet from the list of ingredients. This change resulted in greater sourness of the cocktail. As the violet liquor disappeared from the American market in the 1960s, only coming back in 2007, Savoy’s version remained predominant in the second half of the century.

A controversial name of the cocktail, surprisingly, is not inspired by the USSR’s secret service police. In fact, the name is simply an abbreviation of the three main ingredients, where ‘K’ stands for Kümmel ­– a herbal liquor flavoured with cumin and fennel; ‘G’ is for gin, and ‘B’ is for brandy. The brandy chosen for KGB cocktail is usually apricot. The cocktail is served in a martini glass and garnished with a lemon peel.

10. The martini that won the 1951 martini competition in Chicago

With its history summarized in the title, this cocktail is also known as a 1951 Martini, or a Chicago Martini. It was invented during a contest, launched by Chicago-based liquor dealers Otis & Lee, who were seeking a new twist on the classic. The difference of the winning cocktail from the original was in an additional splash of Cointreau in the glass before pouring the gin and vermouth in. As the finishing touch, the cocktail creators suggested garnishing the drink with an anchovy-stuffed olive.

Whatever taste you might have in cocktails, gin is a versatile ingredient that can be complemented with almost any kind of flavour. This list is just a small portion of all the gin-based cocktails that exist today, so, by all means, keep on trying!