Dial B for Bourbon: 7 Amazing Recipes Worth Making This Summer

If I cannot drink Bourbon and smoke cigars in Heaven than I shall not go.
Mark Twain

National bourbon day is coming! For the uninitiated, bourbon whiskey or bourbon, in short, is a kind of American whiskey prepared mainly from corn. The name of this barrel-aged spirit originates from the historical French Bourbon dynasty. However, the precise source for its name is still being debated by the historians, and contenders include New Orleans’ Bourbon Street and Kentucky’s Bourbon County. The distillation process of Bourbon can be traced back to as early as the eighteenth century, and the very name was coined in the 1820s, eventually becoming popular in the 1870s in Kentucky. Though Bourbon can be manufactured technically and legally manufactured anywhere in the US, it is strongly linked with the down South, and especially with Kentucky.

The most popular Bourbon recipes for summer soirées are described below.

It is also called the “California Sour” and get its name from the orange juice added to the drink. One can never go wrong on a scorching summer day with this cocktail and happens to be comparable to the typical whiskey sour. Mix all the ingredients along with ice in the cocktail shaker and shake vigorously. Fill a rocks glass with some ice and strain the mixture into the glass. Put cherry and orange slice for garnish. 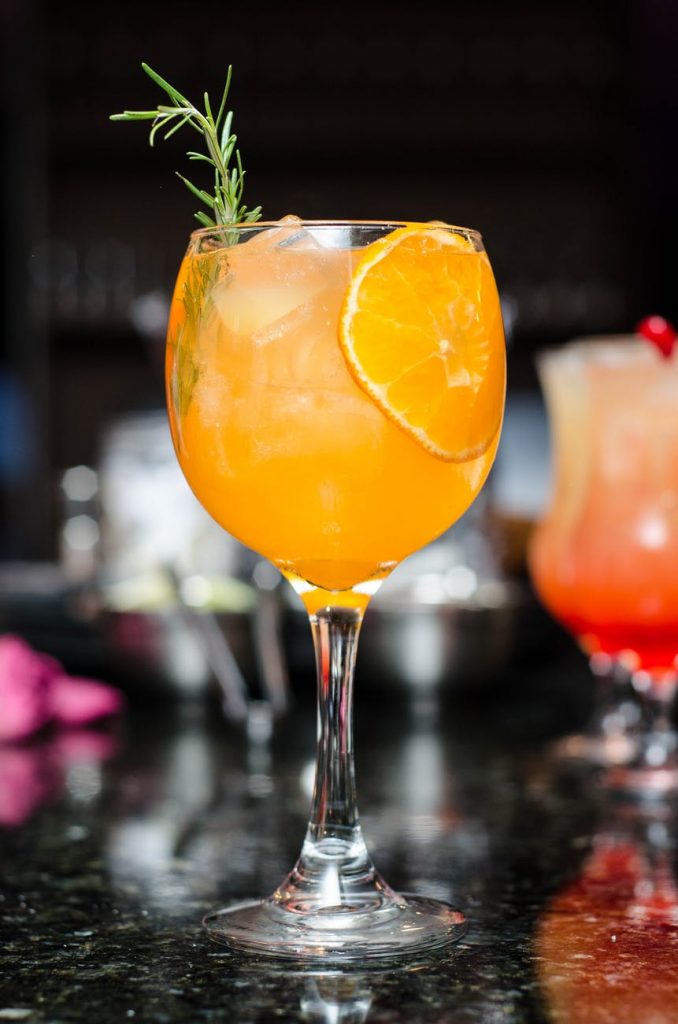 It is necessarily a token whiskey smash recipe, with the exception of a peach-infused variety being used in place of the regular simple syrup. To achieve this, begin with the standard method of preparing a simple syrup (equal portions of sugar and water need to be boiled) and then add some peach slices, mashing the peaches once they begin to boil for releasing the juice. Remove from the flame and keep steeping for at least half an hour. Allow it to be cooled and then mix the mint leaves and the peach slices in the cocktail shaker. Finally, add ice and the remaining ingredients and shake hard. Take a rocks glass, fill it with ice, and strain the mixture into the glass. Put the peach slices, and the mint leaves for garnish.

This recipe comes handy when one does not have the simple syrup ready in the kitchen. Add a few spoonfuls of the jam in the cocktail shaker and mix well. Then add the spirit, ice, and the lemon and shake hard. Now take a rocks glass and fill it with ice before straining the mixture into the glass.

Every host should make arrangement for at least one non-alcoholic drink for the parties they are going to arrange, and this is the one that everybody should try at least once. Add the ingredients sans the ginger beer into the cocktail shaker along with ice and shake hard. Take a cocktail glass and fill it with ice. Strain the mixture into the glass and pour ginger beer on top of the drink. Put one strawberry or any other fruit for garnish.

The Mint Julep is necessarily the drink of the famous Churchill Downs. However, there exist several variations of this drink. The one mentioned in this article is from David Wondrich, one of the well-respected names in the world of cocktail historians. Put a couple of mint leaves in one pre-chilled glass. Then add sugar and mix well. Now pack the glass with crushed ice and pour Bourbon through the ice. Stir shortly until the glass begins to frost. Add some more crushed ice and then stir again. Put a couple of mint leaves for garnish.

What happens when the typical tequila gets replaced with margarita and bourbon is added soon thereafter? A Bourbon margarita! And of course, less hangover and more complexity, and we are keeping Justin Bieber’s haircut out of this discussion!! Add the ingredients and ice into the cocktail shaker and shake hard. Now take a rocks glass and fill it with ice before straining the mixture into the glass. Put a lemon for garnish before serving.

The historical Gold Rush has made the classic hot toddy less significant at the time of harsh winter, sporting the same primary ingredients of honey, bourbon, and lemon. Now, the process happens to be somewhat different, as one is required to prepare a honey syrup; which are equal portions water and honey, bring to be boiled and then allowed to be cooled, similar to the preparation of simple syrup. Then add ice and all the ingredients to the cocktail shaker and shake well. Take a rocks glass, fill it with ice, and strain the mixture into the glass.

June the fourteenth is known as the National Bourbon Day in the US. The US Senate announced that September 2007 would be observed as the National Bourbon Heritage Month on 2Nd August of that year. The bill was sponsored by Jim Bunning, a Republican senator from Kentucky. The Bardstown city in Kentucky hosts the Kentucky Bourbon Festival in the month of September every year since 1991.