Craft Beers: What Are They?

So, you are interested in venturing out and trying new beers. Maybe you have heard friends talk about all these fancy different beers and beer festivals, and they are likely referring to craft beer. These beers are the beer for the connoisseur of beer, they are not just any old beer that you will find at the corner store. This article will explain what exactly this, “craft beer is,” why there is so much hype to it, and lastly this article will categorize the different types of craft beer.

What is Craft Beer Exactly?

Craft beers are various types of beers produced by Craft breweries, which are small independently owned commercial brewers that use more traditional methods to brew their beer and unlike large breweries, these breweries focus on flavor and quality. This is considered an art and there are various techniques that go into making craft beer, as the word “craft” is used to describe the artisanal quality of the various beers. All the effort and attention that goes into producing craft beer means that craft beer is definitely much pricier than your regular old “Bud Light”, but it also means that the craft beer tastes infinitely better. To many consumers of beer, the more expensive price is worth the much better taste that craft beer has to offer. Since the 2000s, craft beer has really increased in production and many beer drinkers only drink craft beer. This is because once they try the craft beer, they taste the difference in quality. Once you drink craft beer, you typically continue to drink it because it is such a better flavored beer than your regular old corner store light beer.

Many craft beers are sold in cans. In fact, since 2012, the use of cans for craft beers has doubled. This means that there is over 500 companies who are using cans as their packaging container for craft beers. Cans are what was traditionally associated with huge brewing companies, but have shifted to be more favored by craft and micro brewing companies. There is method behind this madness, as cans cannot be penetrated by oxygen, light does not affect can beer, canned beer is easier to transport because it takes up less space, the cans that are used allow canned beer to become cold more quickly, and lastly there is more surface available on cans for companies to decorate with cool art to market their beer. Although the idea that drinking canned beer is not as good as drinking bottled beer is outdated nowadays, most craft beers are recommended to be consumed in a glass. The craft breweries recommend pouring the beer into a glass before consuming, as drinking beer directly from a can still may result in giving the beer a metallic taste.

What are the different types of Craft Beer?

Craft beer can be separated into two categories: Ales and Lagers. Craft beers are typically Ales as opposed to Lagers. Lagers, however, are more commonly available as beers that major brand name beers sell, an example might be Budweiser or Coors.

Ale is the most common form of beer that a craft beer is, and it is the oldest type of craft beer, as it has been around for thousands of years longer than lagers have. Ale style craft beer is brewed by using top-fermenting yeast and to ferment the ale it is fermented warm. Ales have a stronger taste than lagers because of this warmer fermentation that they go to. Sometimes craft beer ales are even served at 50 degrees, which is much warmer than ales are ever served.

The Major Types Of Ales Found in Craft Beer Ales Are:

1. Brown Ales – these ales are mild flavored, generally described to have subtle flavors of coffee or caramel. They have a reddish or brownish color.

2. Pale Ales – like the name suggests, the beers are light-colored and are much sharper and bitter in flavor. Many craft beers are Pale Ales, and the ale family includes Amber Ales, American Pale Ales, Blonde Ales, Irish Red Ales, and India Pale Ales (IPA which is a favorite among beer connoisseurs).

3. Porters – these ales are very dark and ten to have subtle flavors of chocolate or coffee. These are thicker beers but not as thick or strong as their cousin below

4. Stouts – these ales are even more dark and rich than porters. They tend to offer flavor notes that include chocolate, licorice, and molasses. 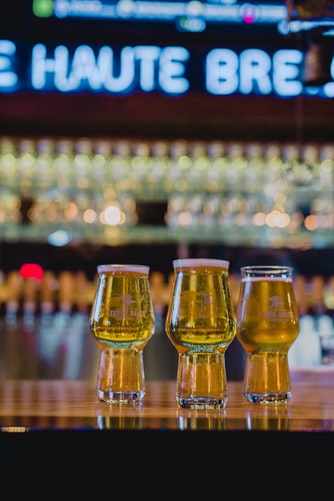 1. Pale Lagers – As the name suggests, these lagers are light in their color but also their body. They have a light bubbly taste because they are highly carbonated. This is the most common style of beer out there, but generally more mainstream and not as often craft beer.

3. Märzens, these are the Oktoberfest beers, they have full-bodies, and are dark copper or amber colored. Their toasty and rich flavor profiles are meltier in taste.

4. Bocks – these lagers vary in color, but offer a mix of sweet maltiness with a bitterness that comes from hops. The bitterness from the hops balances out the malty flavor.