There are so many types of alcohol in the world that you may wonder, “Where did it all start?” Evidence of people drinking alcohol can be found as far back as Neolithic times 12,000 years ago. What separated these people from earlier Stone age people was farming. The Neolithic people were the first farmers. This gave them the ability to stay in one place and to ferment. Farming took off in different places and at different times, but where ever farming began, alcohol consumption quickly followed. Well before bread was invented, people fermented crops. And each time it was invented, it was probably a happy accident.

In order for people to get more nutrients from food, we often need help. Cooking and other preparation methods help release nutrients that our stomachs may find difficult to digest. This is why we grind grains, we add water and cook them. This mixture of grain and water, if left in the open air, can attract airborne yeast. Yeast is a fungus that absorbs carbohydrates and coverts them into carbon dioxide and alcohol. Once yeast is involved, eventually, you will have alcohol. And just as farmers learned to season food, they learned to manipulate the fermentation process for alcohol, adding flavors and sweeteners as they were available.

The great variety of crops lead to the variety of alcoholic drinks. Nearly anything that has carbohydrates can be fermented into alcohol. Once early people had domesticated yeast, they could experiment with nearly any crop that they had. 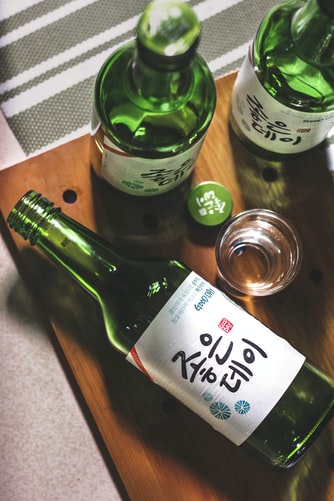 In Europe, and especially in places with shorter growing seasons, people mixed honey and water, along with yeast, to create mead. Maintaining bee colonies ensured that even if other food stuffs were in short supply, honey could always be fermented.

In the West, wheat and other grains were the staples and so, once yeast was introduced, they had something like beer. There is evidence that Egyptians were fermenting beer more than 5,000 years ago. Ancient brewers didn’t use hops, so reports suggest that this beer was a bit sweet and that any flavors added to the brew came through more clearly than a modern beer.

In what is now Iran, there is evidence of people fermenting grapes into wine as early as 6,000 years ago. Once wine traveled to Europe a few thousand years later, Europeans fell in love with it and the great variety of wine in Europe comes from the variety of grapes, yeasts and climates in Europe.

In the Americas, the earliest records of alcohol mention it in the second century. However, alcoholic beverages have probably been around much longer as they were present in South America, North America and Central America. Some of these beverages are still around today, such as pulque and Cauim.

Because of the high sugar content, mead and wine had the highest alcohol content, but they were not as strong as modern spirits. To create stronger spirits, you need to remove some water from the beverage. This requires distillation. There is some evidence of distillation in the first century, but it was not until about a thousand years later that people began distilling modern spirits.

At first, these spirits were considered medicines and the recipes and techniques were considered secrets. In the 1100’s, the production of these medicinal spirits rose dramatically. During the Black Death in Europe, doctors attempted to treat the disease with these stronger spirits. While consuming spirits did nothing to treat people, it did introduce people these stronger forms of alcohol. And it was also this period that saw a dramatic rise in the consumption of alcoholic spirits.

By the 1400’s, perhaps as a way to cook out water to reduce shipping costs, distilled spirits became much more popular throughout Europe. It was around this time that most of the popular spirits of today were created. Whiskey, scotch, vodka and the like are all possible through modern distilling techniques not available in the ancient world.

Modern beer was invented sometime before the 1500’s in Europe. One of the first food safety laws was a 1516 Bavarian law governing the purity of beer. It stated that beer could only be made from water, hops, and barley malt. Hops are flowers that give beer its bitterness and can also add other, subtle flavors to beer.

Every society has treated alcohol differently. Some societies consider it a religious experience, others a pleasurable past-time and still others have tried to ban it completely. What is clear, though, is that alcohol has been with us since the earliest hints of civilization and thanks to yeast and luck, it probably always will be. While there is no single invention or discovery of alcohol, each time it was discovered, it is clear that people found alcohol to be a pleasant and welcome drink. And perhaps, as the world changes, there may yet be more alcohol to be invented in the future.