Mulled wine, also known as spiced wine, glühwein, vino caliente, bisschopswijn, and much more, is a deliciously spiced and heated wine, often enjoyed during Christmastime all over the world. In fact, the word mull simply means to warm with spices or fruits, and variations in each language tend to follow the same naming structure. Mulled wine has a similar flavor no matter where you are drinking it, but each country tends to have their own style when preparing it. Here, we give you eight simple mulled wine recipes, each from a different country. But first, the history of mulled wine.

Heated wine first appeared in ancient Greek and ancient Rome. Instead of wasting the wine leftover from the harvest, both the Greeks and Romans were known to heat their remaining wine to preserve it. Not only did the heat preserve the wine, it also helped warm them in colder months. The addition of spices came a bit later, with two main purposes. One, to add flavor to the heated wine, which often did not taste good. Two, for health benefits. The Greeks and Romans believed that adding spices to their heated wine prevented sickness and were generally beneficial for their health.

As Greek and Roman culture spread across modern-day Europe, so did mulled wine. Different countries across Europe picked up the mulled wine tradition and added their own twist. Along with spices, Europeans began adding flowers to the wine as a natural sweetener to improve the flavor. In some mulled wine recipes, such as in Sweden’s glögg, there is an addition of some liquor, like vodka or bourbon.

Why Do We Drink Mulled Wine During Christmas?

In 1843, Charles Dickens published A Christmas Carol, wherein he mentioned a popular mulled wine being drunk during Christmastime. Simultaneously, in the late 1800s, glögg in Sweden began to be associated with Christmas. The reasoning behind that is uncertain. Thanks to Dickens and glögg, mulled wine is now a popular Christmas tradition. You can find it at Christmas markets, like the famous Christkindlmarkt in Germany, or at restaurants during the winter season. If you don’t fancy buying a glass, look no further, because we’ve got eight easy recipes for you to follow from all around the world.

We’ve put together eight simple mulled wine recipes for you. Each country has a different style and a different name!

The preparation for all of them is identical, unless noted with the recipe. Pour the wine into a pot and add the spices and fruits. Bring the mixture to a boil, then reduce to a simmer. Simmer for at least 15 minutes, drain the spices and fruit, serve warm. It is optional to add fruit or spice garnish when serving. Make sure that you do not leave the mixture at a boil, or you risk removing all of the alcohol content…and who would want that? For best results, we recommend that you simmer the wine for longer than 15 minutes. Try leaving it in for one to two hours, that way, the spices and flavors will properly mix.

There are a few other ways to prepare mulled wine. If you have a cheesecloth available, you can put the spices and fruit in the cheesecloth and place that in the pot of wine. That way, you will not have to strain it at the end. You can also prepare your mulled wine in a slow cooker or instant pot. You’ll prep the ingredients the same way as you would for a stovetop preparation, then heat the wine on low for one to two hours. If you choose this method of preparation, be sure not to put any fruit peels in the slow cooker. Now you know how to prepare it, onto the ingredients! And remember, you don’t need to buy expensive wine for these recipes. Mulled wine is delicious, no matter how cheap the wine is!

Add almonds and raisins after wine is prepared, while serving. 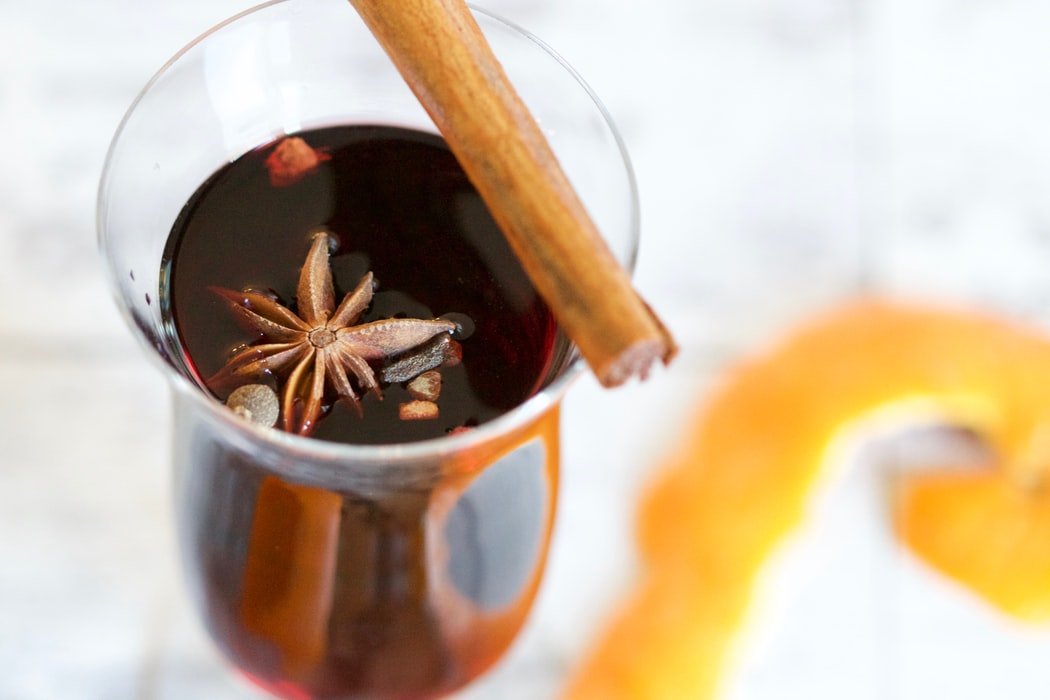 Grab a bottle of red wine, some spices and fruits, and get to mulling!