How to Drink Rum

Houston, We Have a Bottle of Rum!

Few would disagree that rum is the most underappreciated and undervalued spirit. When people talk of macho, classic, sophisticated drinks; rum can seldom be found included in the discussion. Whiskey and its different variants are regularly advertised in the hands of a stereotyped gentleman with a long mustache, lying in a recliner with a hardback.

Gin makes a supportive base for the glamorous martini and other noble cocktails as well. Even the mighty vodka is frequently consumed in urban bars and has eventually become the favorite spirit of Eastern European nations for centuries. Rum, however, is typically viewed as an item of slavery and piracy, with no substantial benefit except being a mixer for tropical fruity beverages or the good old Coke.

Au contraire; rum comes with a glorious history (it even took part in the great American Revolution) and an even more glorious present and future, being a drink that can be sipped with ice or neat, or as an exciting base in numerous spectacular cocktails.

Rum is prepared by distilling sugar cane, sometimes from raw juice, or most often from molasses; the latter necessarily being a refined sugar obtained by boiling. Soon after distillation, the bottles are filled with rum, which is primarily used as a mixer for cocktails; or, it is matured in a barrel, typically a used whiskey barrel, for at least a year, but often longer than that; creating a vibrant, dark spirit that can be enjoyed like a whiskey.

The tropical climate of the Caribbean makes rum age faster when compared than those manufactured in higher altitudes. The liquor also ages quicker due to the fact that it contains less number of congeners when compared with other spirits, needing less mellowing than a fiery bourbon or Scotch.

How does it match up against other options?

In sharp contrast with whiskey and other alcoholic drinks, there does exist no actual standard for grading, maturing, labeling, etc. Rums can be very dark or transparent, they can be spicy or aged, or they can be synthetically colored to give them an aged appearance (there are inexpensive colored rums like the Bacardi Oro). While this does make rum a tad difficult to understand, it also makes the drink a phenomenally diverse spirit. Today, one can purchase a good quality rum for significantly less than a good quality whiskey, and can have it on the rock or neat similar to other spirits.

Rum is pretty hard to classify. Again, it is not similar to whiskey, whose production is governed by stringent regulations for maturing and labeling. Rum is kind of a free-for-all, with every manufacturing country holding a different set of laws and rules for maturing, final proof, etc. It can be labeled as rum provided it is a distilled beverage obtained from molasses or sugar cane juice. The spirit can be classified in the following ways.

It is famous for light-bodied rums that are very lightly matured or unaged, having a sweeter, cleaner, and crisper taste.

It is renowned for richer, darker rums that are matured for a minimum of one year. They come with an overpowering flavor of molasses most of the times.

It is more of a particular style, and post stills are employed to distill fermented cane juice for its preparation. They are often matured in used barrels meant for cognacs (sometimes oak barrels are also used) for many years.

By body or color

It is always almost unmatured and transparent in color. It is the most famous style because it is inexpensive to produce and thus offers excellent value for money for the buyer. Though not that much great for sipping, primarily used as a cocktail mixer, especially in Papa Hemingway’s favorites, the daiquiri, and the mojito.

It is golden in color instead of dark brown, signaling that it had been aged, though often minimally so. They are still pretty light most of the times, and are used as a cocktail mixer and not as a sipper, though not always. This category is ambiguous and tricky; as spiced rums including Captain Morgan’s and Bacardi’s are typically produced on this style, but some do come with added coloring or flavoring; usually like vanilla, caramel, and cinnamon.

It is golden or dark brown. They are usually matured for many years in wooden barrels and come with the most sophisticated and vivid flavors. They are as good as a premium whiskey or brandy, and can even take the place of those liquors in cocktails.

It should be preserved in the cellar or pantry or even in the closet, i.e., in a cool and dry environment. One should always remember to close the bottle, or else, it can spoil the spirit.

Straight up indicates the absence of ice and on the rocks signals its presence in the drink.

Put it on the tab denotes the bartender will maintain the total number of ordered drinks, and thus, offering the consumer the benefit of consolidated payment.

The drinker can even utter “surprise me,” to allow the bartender demonstrating the mixing talents and also adding a shock substance or an element of surprise to the drink.

The process of maturing is typically performed in bourbon casks.

Grappa glasses are pretty good and as long as anything that channelizes the fragrances to the nostrils will prove to be a nice bet. 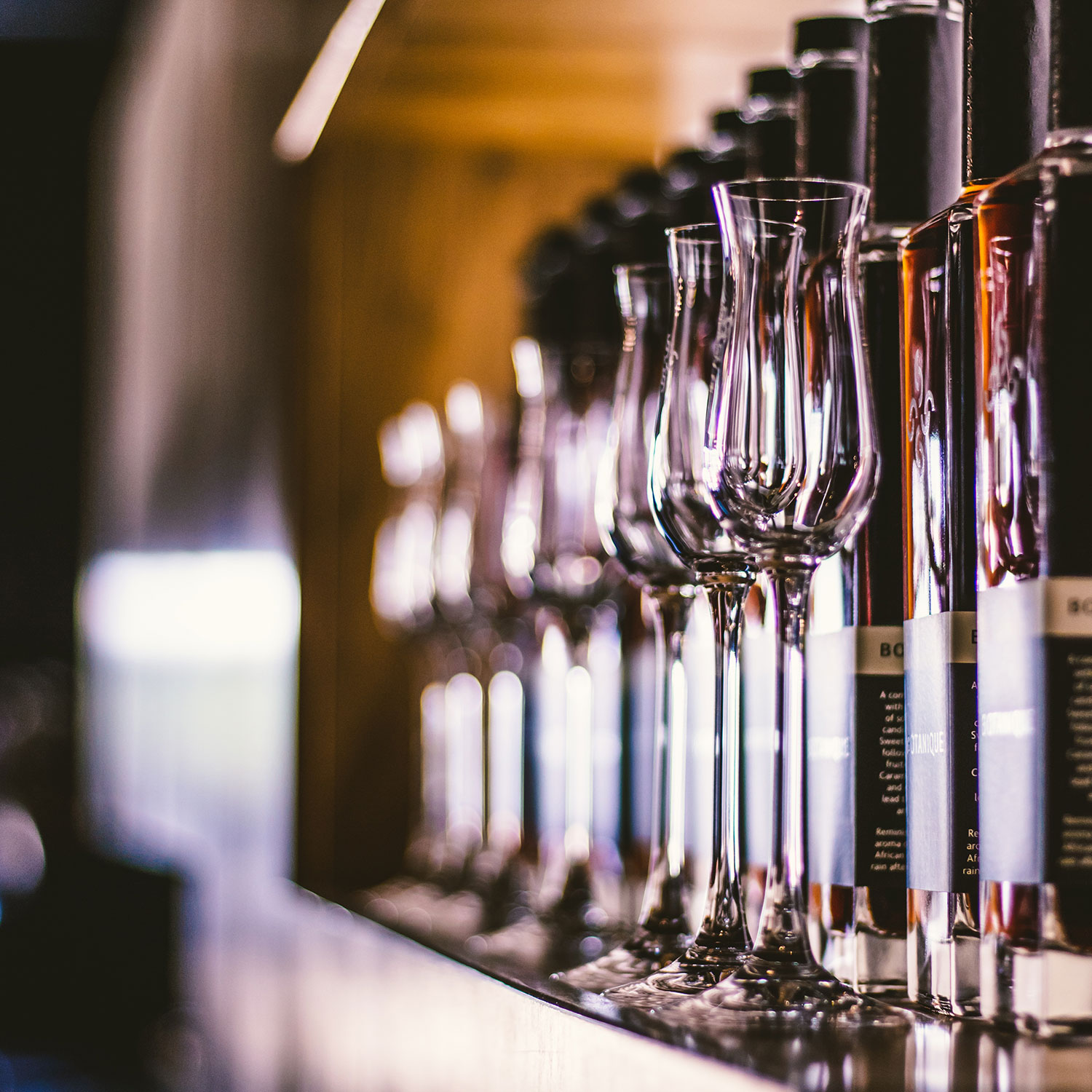 Rums should be served at room temperature and neat. That is when the drinker gets the chance to experience the most aromas and the most flavors. Unlike testing wine, it is perfectly alright to hold the glass in hands to warm the spirit gradually.

It should be taken slowly. Unlike as in case of wine, it should not be inhaled, as it will blow the nose into tiny little pieces. The rule of thumb is one nostril at a time and from a safe distance. Let the beverage seduce the drinker with its aromas and fragrances, and then one is supposed to withdraw for a minute, before smelling the drink closely once again. It will create the best effect, as strong alcohol renders the human olfactory system incapable of comprehending anything.

It is suggested to sip it a little in the beginning. The idea is to get the taste buds used to it and allowing the drink to roll around every part of the tongue. One should always remember that the concept of spitting does not exist in spirits. Part of the thrill of a truly exciting spirit comes afterward, once someone exhales it, that person will receive a gamut of treats that emerge right on the palate on that very breath.

It is essential to keep in mind that everybody has got different taste buds; and hence; everyone will perceive and experience all those cocoa flavors, yummy vanilla tones and the tannins from the barrels pretty differently.