The B-52 is a classic throwback drink, also called a Bifi or Bifty. It’s a beautiful layered shot, made from coffee liqueur, Irish cream and Grand Marnier. Recently, the Grand Marnier has been being replaced by Triple Sec or Cointreau, but it still has generally the same flavor. There are a couple of stories as to where the drink’s name originates from. One story suggests that the name references and pays homage to the US B52 long range bomber, a military aircraft. It dropped incendiary bombs, which may explain where the idea for Flaming B-52s came from. Another story is that bartender Peter Finch, who named his creations after bands, musicians, songs, and albums that he liked, naming the drink after the musical group: the B52s. (Famous for their songs, Rock Lobster and Love Shack) Wherever the name came from and whomever created it aside, it’s a wonderfully eye-and-tongue-pleasing drink.

Don’t worry about the fact that this is a layered drink. It’s actually quite easy to create, and the layers actually create a visual aesthetic that is rarely seen in shots. And, it tastes great whether you drink it straight or stir it up before drinking it.

There are several variations on the B-52, some of which can get rather complicated. But, these are just simple ingredient substitutions or additions.

This takes the coffee flavors in the Kahlua to a whole new level by topping it off with coffee and whipped cream. The flavors blend together nicely.  And ,even though there are several different things going on in this drink, it’s not overpowering. 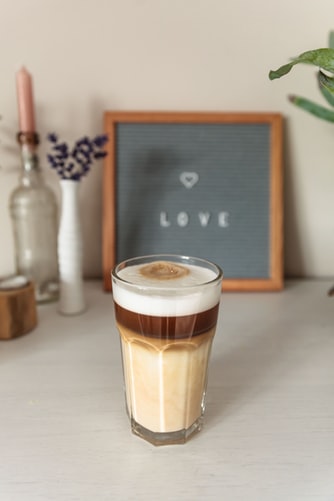 This is definitely one shot that everyone shout try at least once. It’s a little daring and wild, simply because it’s actually on fire when it’s served. The fire doesn’t really seem to take away from the flavor of this particular drink, nor does it add any. It’s simply fun, and a real crowd pleaser as a result. Just remember to start with a heat-resistant glass or mug. And, for obvious safety reasons, remember to put it out before you drink it.

This drink is as delicious as the name is funny. Where did it get its odd name? A bartender in Alaska was creating drinks one night when he stumbled upon the idea for this one and gave several to a patron. She loved them, and they gave her a particularly noisy bout of gas. Thus, they decided on the name: Duck Fart. Rather than the Grand Marnier that usually floats atop a B-52, Crown Royal is used, giving it a different flavor that you’re sure to enjoy.

This drink is a slight variation on the B-52, with several substitutions being made. Rather than using Grand Marnier, Cointreau is used, Kahlua is swapped out for the less sweet Patron XO Cafe, and Amarula is used in place of Bailey’s. Much of the overall flavor of the B-52 is present in the Rhino Shooter, but a few new ones are added as well. It starts off with a strong coffee flare, followed by some butterscotch notes and finishes with notes of tequila. So, if you’re looking for a B-52 that’s suited for a more refined palette, the Rhino Shooter is the way to go.

It really doesn’t matter if you like the story about the B-52 being named after the US B52 Bomber, or the B52s, it’s still a fun drink either way. It tastes great, and there are enough variations on the original that you’re sure to find one that will fit your own preferences. One thing’s for sure though: drinking a few of these shots is a fun way to get “bombed”!