You may find yourself now again wondering just how in the hell you’re supposed to get drunk when the craft cocktail scene seems to be kicking the world off its’ feet with $12 drinks made by some exuberant mixologist in a white button down shirt, black silk vest and an oddly groomed and proportional mustache that looks like it’s right out of the 70’s. Well, you could avoid those places altogether and stick to a dark corner of your apartment with one dimly lit candle, or, you could drink from the first shelf behind the bar and stretch what’s in your wallet like Mr. Fantastic. Either way, a buzz is a buzz. And we’re all out here trying to make that last.

So, for all of you wondering what the best cheap mixed drinks are, here are my top 10 to circulate through your repertoire that carry both a swift kick and flavor to make you feel like you’ve just walked into a New York speakeasy.

1. Lemon Drop Martini. I already know what you’re thinking. For some reason or another, martinis radiate this mystic glow of elegance and class. Well, sure, that may be true in some cases. But they’re also insanely easy to make and require minimal ingredients. Stick with a house vodka or something like Tito’s, some lemon juice and a sugar rim and not only do you have a cocktail that doesn’t break the bank, but you also have a drink full of luscious developed flavor. Take 1 ¼ oz vodka, ¼ oz Triple Sec and ¾ oz lemon. Shake, strain, enjoy!

2. The Mule. Now, notice how I don’t limit this drink to just Vodka…or the Russians, for that matter. That’s because the Mule can be delivered in so many variations. You can have yourself a Tennessee Mule that warms the soul like a blazing fire in the dead of night, a Mexican Mule with the sharp scream of tequila or a London Mule if you’re feeling dangerous. Gin isn’t my thing but the point here is that you have options. Add some ginger beer (or ginger ale if you’re really strapped) and some lime juice to make the Mule come alive. Trust me, you won’t regret giving this one a try. Take 1 ½ oz of whichever spirit you wish to enjoy, half a lime squeezed and 4 oz of ginger beer or ginger ale depending on how much spare change you have in your pocket.

3. Cuba Libre. This drink has a fond and permanent place in my heart. For one, rum is one of the cheapest sprits around and on another note, it carries so much flavor and oomph that makes it so very enjoyable. Whenever I travel and can’t decide what to drink whether in the jungle of Bali or on the beaches of Belize, my mind goes right back to that delicious and inexpensive variation of a rum and coke with a little added lime. You need ½ a lime juiced, 2 oz light rum and 4 ounces of cola. It doesn’t get much easier than that!

4. Poor Man’s Dark and Stormy. I wouldn’t feel right if I put this one in as just a normal Dark and Stormy. That’s probably because I was so broke in college and in my earlier years on the road that I didn’t even know the Dark and Stormy was supposed to be made with Ginger Beer. I could never find it in whichever dark corner of the world I was in at the time. But what I will say is that if you don’t have a taste for ginger beer and want to save a few bucks, simply ask your bartender for a Poor Man’s Dark and Stormy to turn that frown upside-down. All you need is 2 ½ oz light rum, 4 oz Ginger ale and 2-3 lime slices.

5. Mimosa. Let’s take it back to the absolute basics for a moment. Think of yourself walking down any busy street before noon and hearing the hysterical roar of laughter oozing from the restaurant patio to your right. The sun is bright. There’s a slight breeze that feels nice in the heat. You look at your watch. It’s 10 A.M. How can this be? Mimosas, that’s how. And most restaurants offer them bottomless on certain days and within certain time periods (usually weekends at their busy morning hours). Champagne is cheap, orange juice is cheap…what’re you waiting for? Get out of bed and get out there. Fill your flute glass or paper cup half full (about 3 oz) of cheap dry champagne—Mumm Brutt will do. Next add as much orange juice as you need. Some of us like to bury the taste of the alcohol. Others, well, let’s just say they don’t.

6. Black Russian. Can anybody guess what the primary spirt is in the Black Russian? Yup, you got it. Tequila…just kidding. You knew it was vodka. Both luscious and economical, this cocktail carries with it a superior taste and bang for your buck. Find yourself a nice cheap bottle of vodka as well as some coffee liqueur and there you have it, a Black Russian. Oh, and if you’re feeling like shaking things up a bit, add some cream to make it a White Russian. Who said drinking cheap didn’t come with options? Take 1 ½ oz vodka, ¾ oz coffee-flavored liqueur (similar to Kahlua), 1 cup ice and stir. 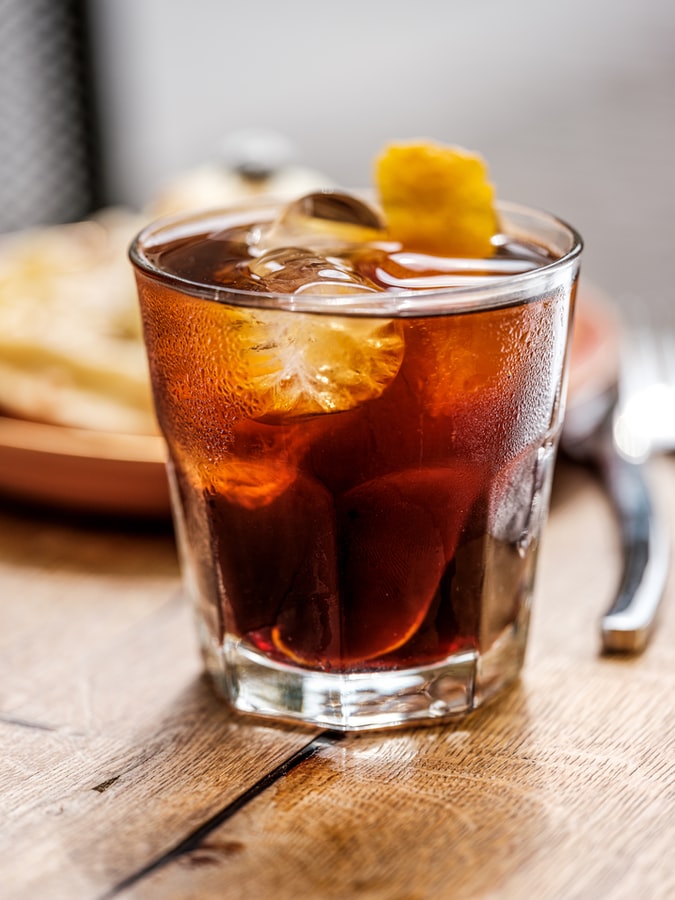 7. Whiskey Cider. Do you want a cocktail that really spits fire and makes you feel like you’re walking on hot coals? Look no further. The Whiskey Cider has you covered. Best for when the leaves change colors and temperatures sit right around 45 degrees Fahrenheit, the Whiskey Cider is best made with Jack Daniels and any grocery store carton of apple cider. They usually put those out right around October. All you need is 2 oz whisky and 4 oz apple cider. Yeah, that’s literally it.

8. The Cape Codder. Ah yes, Cape Cod. Beautiful sandy beaches, the smell of ocean air, and…wait for it…cranberry juice. This cocktail is a perfect drink anytime that’s cheap, easy to make and as refreshing as quick dip in the Atlantic. Simply find yourself some cheap vodka, a bottle of cranberry juice and poof, The Cape Codder. Start with 3 oz cranberry juice, 2 oz vodka and a lime wedge if you feel you need it. Pour the ingredients into whatever cup you have at your disposal and sip slow, my friend. It’s a marathon, not a sprint.

9. Tequila Pineapple. Talk about feeling like you’re on an island with a cocktail that will almost always run you under six bucks. This may be one of the most common and widely appreciated cheap mixed drinks out there. Fruity, smooth and stiff. If you haven’t tried this than I really have no idea what you’ve been doing. Probably drinking white claws out of your parent’s refrigerator. Take 3 oz of pineapple juice and 1 ½ oz tequila and pour the ingredients into your red solo cup. Squeeze a ¼ of a lime in there as well if you find it to sweet. The lime will really jazz it up.

10. Vodka Soda. How can I not put this on here? We’re all on some sort of diet, with some sort of restricted budget just trying to have a good time and stay weird. Look, I get it. I really do. The Vodka Soda really isn’t that bad (keep telling yourself that). No, but in all honesty, the Vodka Soda may be on of the best and most go-to cocktails once you’re three steps from blacking out and ordering Taco Bell from Uber Eats. Get on with your bad self. The ingredients are as followed for the best balance: 1 ½ oz vodka, 3 oz soda, ¼ of a lime squeezed and a sprinkle of shame. Simplicity at its finest there, folks!