Drinking is an integral part of Japanese culture. From ancient times it has been part and parcel of Japanese rites and rituals. They organize drink parties at izakaya and restaurants to celebrate and enjoy the evenings. Japanese also have social, political and economic discussions across the drinking tables. Thus, there is a sheer variety of cocktails and other alcoholic drinks hosted by Japan. In short, you can say Japan has something special for everyone.

Japanese are known worldwide for their work-culture and punctuality. They enjoy their work and are nowhere behind in spending leisure time with friends and family. It is evident by watching business person going out with colleagues for drinks after work. From Sake (Rice Wine), Shochu, and Awamori, to beers there is a wide range of unique flavored and traditional Japanese beverages that are good to taste and favorite among the Japanese folks. Here are the top ten Japanese most preferred alcoholic beverages:

Sake has got worldwide fame as the representative drink of Japan. It, in fact, refers to different types of alcohols in Japan. People outside Japan call it ‘Nihonshu’ or Japanese liquor. Sake is prepared by mixing water with fermented rice and koji (a mold spore). Rice is the main ingredient in its preparation, so it is popularly k/a Rice wine too. The process of fermentation is similar to beer, and they usually prepare in breweries. Enjoying it with Sushi may be a preferred choice.

Shochu is Japanese-style Vodka which is stronger than Sake having more alcohol content. The common ingredients used to prepare it are buckwheat, sugarcane, barley, sweet potatoes, and rice, so it imparts different flavors on distillation. It has several health benefits over other drinks like it is low in calories, prevents strokes and heart attacks, and is known for not causing hangovers. People living in the south area on the islands of Kyushu and Ryukyu usually prepare it as the hot climate is not suitable for brewing Sake.

Beer outperforms any other alcohol demand at an izakaya in Japan. People order it before even giving a glance at the menu. Most of the drinkers buzz Toriaezu biiru which means ‘let’s start with beer.’ Beer constitutes roughly one-third of alcoholic consumption in Japan. The drinks usually start with draft or draught beer often called ‘nama biru.’ Beer usually prepares from cereal, hops, water, and yeast. It was introduced to Japan by Dutch merchants at Dejima, a trading port island.

It is a liqueur made from alcohol base like sake or shochu mixed with juice or peel of citrus fruit Yuzu. Yuzushu is similar to limoncello and tastes tangy like lemonade. It is a popular drink for winters just after the Yuzu season. It gets consumed either after mixing with other drinks or only with water and ice. In the market, its level of sweetness, bitterness (due to peel extracts) and fruitiness differ with different brands.

Umeshu is also favorite Japanese liquor that tastes very sweet, almost syrupy. It is prepared by soaking Ume that are Japanese plums and sugars in base alcohol for an extended period stretching to several months. Some other ingredients added to it are Green tea, lime, etc. It is excellent to serve plain or on the rocks. It also blends well with several vegetable and fruit juices like acerola, orange or cherry to make an exquisite cocktail. Mint leaves add on flavor to it.

Amazake common as ‘sweet sake’ is a favorite New Year drink in Japan. The drink usually warms up during the winter season. The creamy sweet drinks come in two distinct flavors. One prepared from sake lees which contain alcohol. Another prepares from rice koji and is non-alcoholic. It is safe from the health point of view as it provides with nutrients like glutamine, vitamin B and dietary fiber. 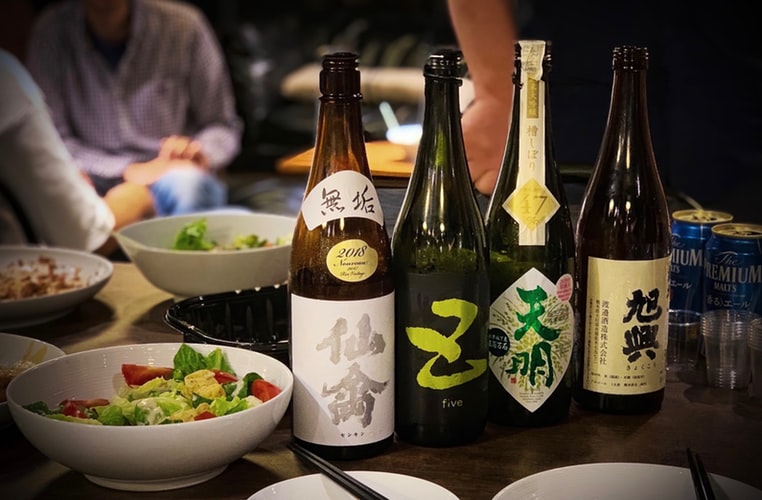 Whiskey makes an admired drink in Japan since the 1950s. Japan is famous as the world’s second largest producer of Malt’s whiskeys which are distinguished for their exquisite taste. Japanese whiskey has a light taste and a more subtle flavor than Scottish whiskey. Many people in Japan drink whiskey cocktail that is well-known as ‘highball.’ It usually mixes with soda and often served on the rocks. It gets consumed with meals mixed with sparkling carbonated water.

Awamori is also the liquor made from long-grained Thai style rice and prepares mainly in Okinawa. It appears similar to Shochu and has a distinct taste. The Okinawan version of Shochu has high alcohol content as compared to Shochu and is less likely to leave you in a hangover. Either dilute it with fruit juice, carbonated water or serve it on the rocks. Awamori retains its aroma and taste even after aging.  It is k/s Kuusuu after aging for three years.

Chuhai derives its name from combining two words ‘shochu’ and ‘highball.’ The drink clubs in carbonated soda water with fruit-flavored shochu. Different flavors can be prepared by using lemon juice, grapefruit juice, ume, peach, oolong tea, etc.  It forms a tasty cocktail, therefore is a favorite in many izakayas across Japan. The alcohol content in the canned version is around 3 to 9 percent. The Chuhai cans are also great for al fresco parties during hanami (cherry blossom) season.

Oolongcha hai or simply Oolong hai is one more drink that prepares from Shochu. It starts from simply mixing oolong tea with mugi shochu. It can also combine with imo shochu, but it will exhibit a strong taste. You can also develop a variant flavor by using sweet potato shochu. The strong oolong tea flavor can overpower the taste of mild mugi shochu. It is undoubtedly going to be your choice if you are a tea lover.

It is not surprising that a country that can change even the simplest foods to artistic forms pull out to stop when it comes to alcohol. The long boozing Japanese history dates back to thousands of years. They have pretty formally developed different tastes and flavors of drinks and cocktails. There are undoubtedly numerous drinks, but the most famous ten drinks covered here finds special mention in the menu card of any Japanese pub or restaurant. Add them to your drinking repertoire while you pay a visit to Japan.