The Presbyterian Cocktail is a classic drink that’s traditionally made with Scotch whisky, ginger ale and club soda. Because it’s only comprised of three ingredients, it’s pretty easy to make, but it’s also easy to drink. The ginger ale adds some spice and sweetness, while the club soda adds some sparkle to the drink. It’s pretty light on alcohol content. If you use an 80-proof whisky, it ends up being around 9% ABV, or 18 proof. So, it would take a few of these drinks to get you tipsy. All of these reasons make the Presbyterian Cocktail a refreshing drink that’s great for cookouts, Summer parties, or mixing yourself up an easy drink.

Because of the simplicity of the drink, there are many variations of it. The only ingredient that remains a constant is the Scotch or whiskey. Scotch is the traditional ingredient, but some people prefer bourbon. If you want to use Scotch, remember that you can use a good blend, but that you don’t have to break out the top-shelf, high-dollar brands. When choosing bourbon, make sure that you choose a robust blend so that the flavor isn’t hidden by the soda.

We’re not sure how the Presbyterian got its name. It may have something to do with the fact that Scotch whisky is used, and the Presbyterian church is the national church of Scotland. But, regardless of who named the drink, when or why, it’s an apt name. The history of the Presbyterian church can be summed up in two words: “struggle” and “conflict”. And the whisky and ginger ale are conflicting flavors that, when combined with the club soda, provide one with a religious experience. Here are the best Presbyterian cocktails.

As previously mentioned, there are several variations on the original recipe, but this is the traditional way to make a Presbyterian cocktail. It’s crisp, refreshing and effervescent, so it’s a great drink to sip on a hot day. And, after you figure out how to nail the recipe, it’s light enough in alcohol content that you don’t have to feel bad about making yourself another!

This is a bit more complicated than a traditional Presbyterian cocktail. Rather than using ginger ale, a homemade ginger syrup is used. Don’t get too nervous about the complexity of this drink, because the flavor payoff is definitely worth the extra steps!

This recipe is even simpler and easier to make than the original. Rather than using a combination of ginger ale and club soda, the club soda is omitted in this recipe.

A Bourbon Press is very similar to a Presbyterian made with bourbon. This recipe adds some fun, citrus-y flavors to the bourbon-soda-ginger ale combinations traditionally seen in a Presbyterian. The Grand Marnier and orange are a great addition!

This drink got its name from a famous opera singer of the same name who ordered this particular drink from a bartender in New York around 1899. And thus, the drink was born. It’s a lot like a Presbyterian, but with the addition of lime juice, and it’s garnished with lime instead of lemon, too. The lime does a good job of cutting down on the sweetness from the ginger ale, making this drink more balanced than the traditional Presbyterian. 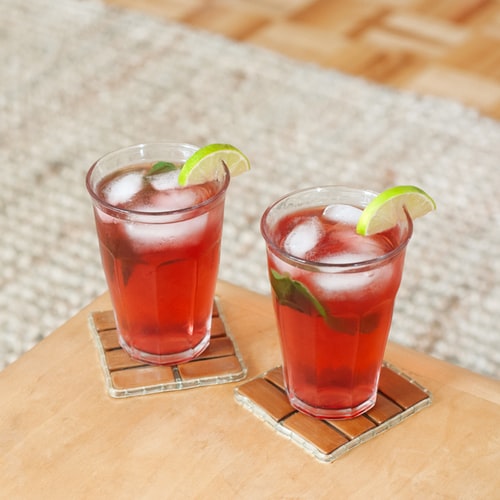 This is another drink that’s very similar to a Presbyterian cocktail. The only real difference is that there’s more ginger ale in it, and no club soda. It only takes a few seconds to make, too, making it great for a weeknight cocktail.

The Presbyterian cocktail’s origins may be mysterious, but the recipe is not. It’s a simple, 3-ingredient cocktail that’s quick to make. It’s pretty well-balanced, too. There’s just enough ginger ale so that it’s sweet, but the club soda keeps it from being too sweet. All of the drinks on this list keep the spirit of the Presbyterian cocktail, and most of the ingredients, making them all great choices to please a crowd, or to enjoy a refreshing drink alone at the end of the day.