It is no doubt that Soju secured its place among the most famous distilled alcohols available worldwide. This harsh spirit containing an ABV (alcohol by volume) of 20% is prepared from rice and marketed in eighty countries around the world. It is undoubtedly a native Korean alcoholic beverage, and its comparatively low price point makes the drink accessible to everybody.

Soju runs through the blood of the Koreans. The most famous brand Jinro sells nine million bottles every day. A hole in a wall at a Korean barbeque place, the quasi-cacophony of K-Pop, and a cute lass offering you a glass of Soju; all the commercials of this drink shown in the idiot box indeed concentrate on the Korean lifestyle an values epitomized by This liquor.

While the Koreans are pretty much obsessed about Soju, others found it unmistakably awful!

However, there does exist an irresistible appeal to the little green bottles. When the Koreans drink the Soju at their tables, and which necessarily forms their sharing ritual, the way they pour the drinks asserts Confucian’s rules for the dinners. Drinking Soju is no doubt a serious business and doing it the improper way could mean accidentally insulting one’s superior. So, here is a primer for Soju.

How to place an order?

Make sure that you order some beer too. OB Golden Lager would be perfect, but Hite would work also.

How to open the bottle?

Opening a bottle of this spirit is no less than a ritual. First, surprise your bottle by swirling it, and watch for little bubbles traversing throughout the bottle. Then bash the base of your bottle against your elbow and crack it open. Finally, spread your fingers and jab its neck.

Always remember not to drink from the bottle. It is an unforgivable sin. 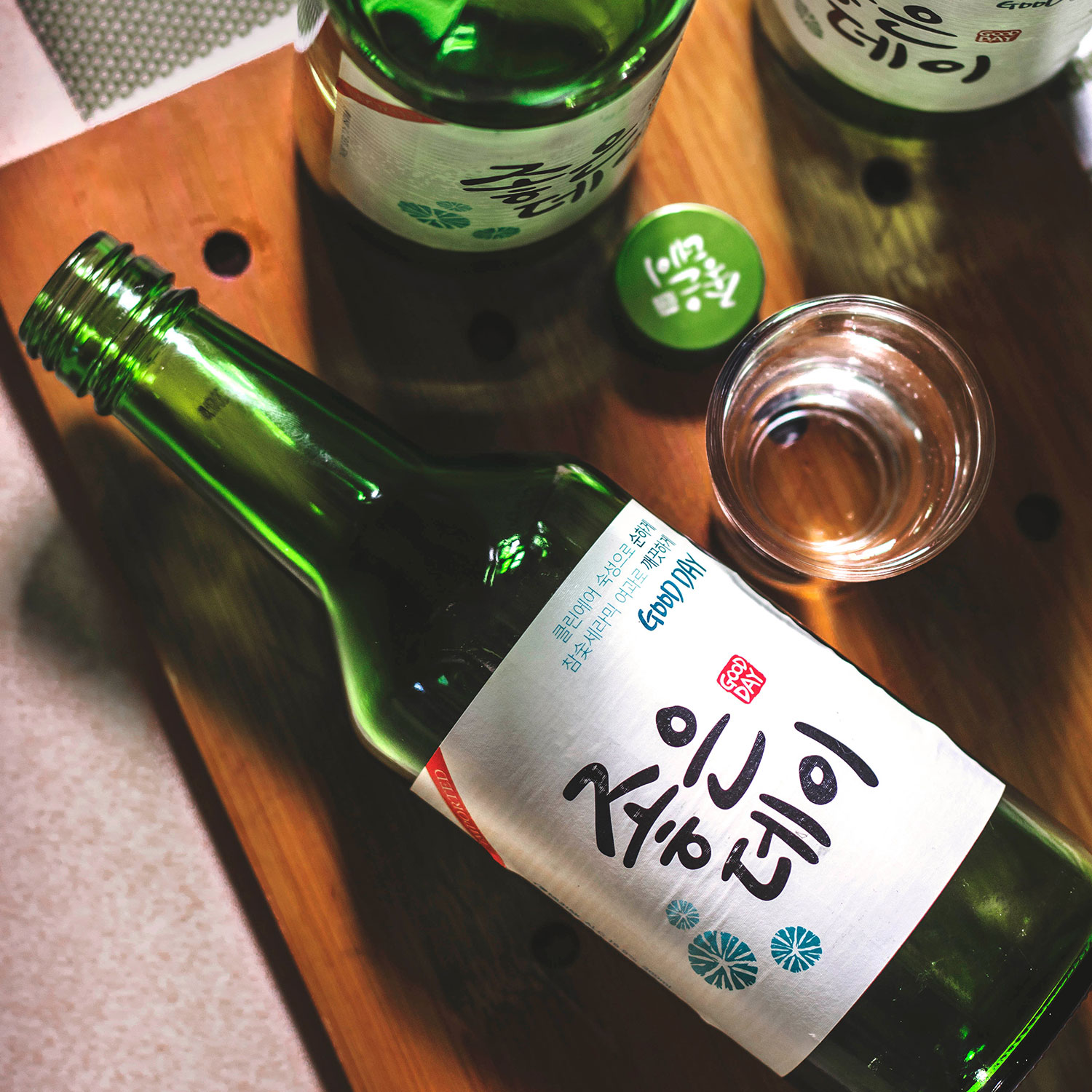 A senior member of your group will offer you a shot glass. Never forget to accept the glass with both of your hands. The Koreans will always receive anything from an older person with both hands as this gesture means showing respect.

The senior member will pour the drink for you. Never pour a shot yourself at a table in Korea.

When you have it, position your head to any side and do not try to make eye contact with the one who poured your drink.

You are supposed to shoot the first drink. While Koreans tend to shoot every single drink, it is perfectly alright to sip your drink if you wish. However, the very first one must be dropped in one shot.

Give your glass back to one who poured your drink after emptying it and do pour Soju for them. It will necessarily translate to a number of bottles and glasses being passed around your table. It becomes relatively uncomplicated after the first shot, which is indeed a strict ritual. The rule of thumb goes like this, as soon as you spot someone with an empty glass, offer to fill with Soju on behalf of that person.

Jinro
It is Korea’s most popular brand and comes in varieties like Jinro fresh and Jinro original.

Chum Churum
Being milder than Jinro, it is pretty favorite among female drinkers as well as novices.

Saan
It is Soju blended with green tea.

Andong
The unique selling proposition of this brand is its seven-hundred-year-old proprietary brewing method, and it is very much popular among the foreign tourists.

Lee Gang Ju
Cinnamon, ginger, pear, and honey are blended with the good old Soju to prepare this.

Koreans are quite fond of drinking games. A Korean table in full swing is bound to be brimming with energy and noise. The Korean dining happens to be overshadowed with intricate social pressure, and hence, drinking games are excellent excuses for everyone to enjoy and unwind for a while.

One word of caution, make sure that you are drinking a lot of water. Soju is strictly not for the chicken-hearted, and the hangover is a bitch!

Titanic
It is best suited for four to five people. Fill a standard beer glass with beer and then try to float a shot glass on the top of that filled glass. Each person fills the shot glass with as much as Soju they wish to, but wait; there is a catch, if it happens to sink while you hold a bottle of Soju, you must finish the beer-Soju mixture. Now that is genuinely Mission Impossible, huh?!

Flick the cap
The metal caps of the Soju bottles are very bendable and can be twisted liberally. Snap the hindmost part of the cap vigorously so that the tiny piece of metal come flying off. Whoever can do this trick successfully gets a chance to make the persons drink sitting on either side. Choose your company of people carefully!

Nunchi (alternate spelling: Noonchi)
Now, this is somewhat more complex. Suppose a table contains five people. The objective of the entire team is to begin with the number one, and to loudly announce the subsequent digits, without more than one person shouting the number simultaneously. For instance, if two people say two, then those two folks only will drink. If the chemistry of the group is impeccable and you reach five, the last person will be required to consume Soju.

Soju Pong
The rules are same as beer pong and merely replace beer with Soju. An additional level of challenge could very well be the middle cup being a hearty mixture of beer and Soju.

With friends
The only rule that holds true in this situation is no rule at all. The Koreans drink Soju after a hectic day at the workplace, socialize, and destress. People talk about upcoming dates and breakups, their kids, sports and what not. Enough talking; now grab or steal (just kidding!) a bottle of Soju, and immerse in the drink that Koreans enjoy for every single reason, or without any reason at all!!