I Know What You Sipped Last Summer: 30+ Handpicked Cocktail Recipes

A good host does not forget to arrange wine, beer, and liquor; but a great host stocks up on mocktails too. Here are most popular cocktail and mocktail recipes that are going to make the evening parties even more meaningful this summer.

1. PB Frappe: Purée one cup of milk with a quarter cup of peanut butter. Add some chocolate syrup into the glass and pour peanut-butter milk on top. Gradually mix seltzer and stir adequately.

4. Sake Spritzer: Add six mint leaves, one basil leaf, one orange wedge, two lime twists, one and a half ounce of orange liquor and a quarter cup of diced cucumber into a cocktail shaker. Add ice and shake hard. Pour into a cocktail glass and add sparkling sake on top.

5. Ginger-Peach Iced Tea: Take half a dozen peach halves and mash them with one and a half cup of the juice, one tablespoonful of grated ginger, and one-third cup of sugar in the pitcher. Mix six cups of chilled English breakfast tea and ice.

6. Pineapple Rummy: Partly fill a glass with ice and sparkling cider. Mix a couple of pineapple chunks and one shot of dark rum.

7. Concord Cow: Add a few scoops of vanilla ice cream into the glass. Add equal parts of lime-lemon soda and concord grape juice and gradually pour the blend on top of the ice cream.

8. Real-Man’s Margarita: Rim a beer mug with table salt and fill it with ice. Pour and mix Mexican beer, a dash of tequila, hot sauce (as per individual taste) and a few drops of lemon juice.

9. Cherry-Cooler: Purée one cup of strong hibiscus tea, half cup of sugar, and half a pound of pitted cherries. Serve with ice and add cherries for garnish.

11. Elderflower Fizz: Fill half of a glass with cranberry juice and ice. Mix a dash each of elderflower liqueur and vodka. Add seltzer on top of it and use mint for garnish.

12. Tequila Paloma: Add one shot of tequila into a glass filled with ice and pour grapefruit soda on top.

14. Lychee Sparkler: Purée ten ounces of lychees with the syrup and strain well. Add splashes of rose water, bitters, and two and a half cups of Lillet and mix.

15. Kiwi Punch: Purée half cup of sugar with seven cubed and peeled kiwis, juice of two lemons, and a cup of water. Strain well and serve with ice. 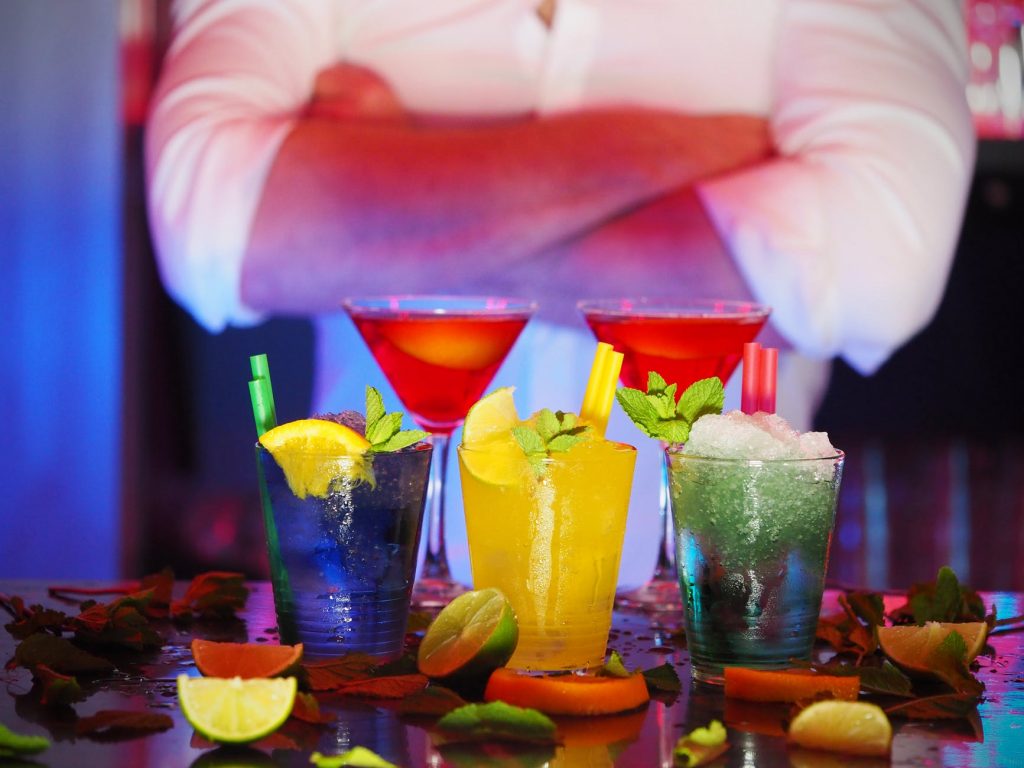 17. Strawberry Limeade: Add a cup of sugar in one cup of water in a pan and set it to low flame. Let it cool down and add a cup of lemon juice, two cups of water, a couple of chopped and frozen strawberries and ice.

18. Pimm’s Ginger Cup: Take some ice and pour two ounces of Pimm’s Number One on top of it. Add a handful of fresh lime juice and pour ginger ale on top. Place a cucumber stick for garnish.

19. Iced Chai: Brew half a dozen black tea bags in four cups of water. Add inch-long ginger and one tablespoonful of spiced Chai. Remove the ginger piece and also the tea bags. Pour a quarter cup of honey into it and stir well. Mix sweetened condensed milk and serve with ice.

20. Fruity Protein Shake: Purée two ounces of silken tofu, a quarter cup of fruit juice, one cup of frozen fruit, half a cup of soybean milk and a few drops of honey.

21. Russian Cherry Soda: Boil a cup of pitted cherries with one cup of sugar in a cup of water and cook until it turns syrupy. Pour into seltzer and stir well.

22. Lavender-Peach Cooler: Prepare simple syrup (half a batch) as described in recipe number seventeen and add a quarter cup of dried lavender to hot syrup. Let it cool and Purée one and a half pound peach with half a cup of syrup and one cup of water. Strain well and add fresh lime juice. Stir it well and serve it on the rocks.

24. Apricot Sun Tea: Take four cups of cold water and steep four bags of orange pekoe tea under the sun for many hours. Add two cups of apricot nectar, juice of one lime, a quarter cup of simple syrup (see recipe number seventeen), one cup of fresh mint and a teaspoonful of vanilla extract and chill.

25. Instant Horchata: Sweeten the rice milk by adding sugar and add one pinch of cinnamon. Serve with ice and place diced pecans and cantaloupe for garnish.

28. Virgin Daiquiri: Use alcohol in place of half a cup of orange juice in the aforementioned recipe.

29. Derby Martini: Add one and a half ounce of bourbon, a quarter ounce of Lillet, half an ounce of cherry brandy, a splash of bitters, one teaspoonful of fresh lime juice and ice in the cocktail shaker and shake vigorously. Strain the mixture into the martini glass.

30. Old Cuban: Add a couple of fresh mint leaves, one and a half ounce of rum, juice of one lemon, two splashes of bitters, an ounce of simple syrup (as mentioned in recipe number seventeen) and ice in a cocktail shaker and shake well. Strain the mixture into a flute and pour champagne on top.