Have you ever heard of Soju or of Sake? Maybe you have heard of both and you are wondering what the difference is. Or maybe you have no idea what in the world either one of these two drinks really is? If you have had Sushi before, you’ve likely seen Sake offered on a menu. If you have ever been to a Korean restaurant you have likely seen Soju on a menu. Well, for starters, these are both very popular alcoholic drinks whether back in their country of origin or here in the States. The two of these drinks, as mentioned, are also both of Asian origin; however, they are from completely different countries. Sake is the popular drink of Japan, while Soju is the popular drink of South Korea. The distinction in the geography of the drinks has historically contributed to shaping the process in which the two drinks are created. In this article, we will be exploring the differences between Soju and Sake, although they are both absolutely delicious in our opinions. Their names might sound similar, but there is not much more similar about these two drinks than the fact that the both start with an “S”. The two drinks as you will find out, while both very delicious, are very different in what ingredients they are made from, the manner they are made, their alcohol content, their appearance, their flavor, and their meal pairings. Wow. That already sounds like a lot of differences and we have not even started comparing the two drinks yet. So let’s go on ahead and dive in to the world of Soju v. Sake, and figure out all the differences and any similarities between these two absolutely delicious alcoholic drinks.

Sake- The Rice Wine of Japan

Sake, as we’ve said, is an alcoholic drink of Japanese origin. Of the two, Sake is probably more commonly known than Soju, and this is primarily because of the popularity of sushi in America. Because Sushi is so popular, many Americans eat at Japanese restaurants, and these Japanese restaurants just happen to have Sake on their menu! Well, now that we know about Sake and we have likely seen it on a menu before, let’s learn a little bit more about Sake. How is Sake made you might be asking? Or, what ingredients are used to make Sake? Well, interestingly enough, as the title implies, Sake is made from rice. That’s right, Sake is called “rice wine” because it is somewhat similar to wine in its look and taste, but it is not made from rice and not from grapes. Sake is somewhat like wine or beer in certain ways. Wine is fermented from grapes and beer is brewed and barely is turned into sugars that convert to alcohol. Sake is a little more like beer than wine in that the rice is a starch that is converted into sugars, which are then able to ferment into the alcohol we know and love. Sake, like wine, ranges from around 14-18% alcohol. This is another reason that Sake is called rice wine, because it is essentially the same alcohol content and is similarly produced in the manner that wine is. Want to know a fun fact about Sake? Not to the surprise of many, Sake is the national beverage of the country of Japan! If you are at a bar you may see what is called “Sake bombs” which involves pouring sake into a shot glass and dropping it into a beer. You are likely to catch a sake bomb at your favorite sushi restaurant and probably during their happy hour.

Soju, as mentioned, is South Korea’s alcoholic drink of choice. It is commonly compared to vodka, because it is clear and fairly strong. Soju has a large range of alcohol content, and can be as low as 14% (like a green apple fruity flavored soju), to as much as 53% alcohol. Soju is typically made from either wheat, rice, or barely, but more recently has been made with starches like potatoes, or tapioca. Once again, more like being a liquor, Soju is not brewed like Sake. Soju is distilled like any other liquor, which explains how strong the alcohol content can be. Soju’s distillation involves converting whatever starch is used (say wheat for example) to sugar. Then, the sugar is converted to alcohol through the distillation process. To finish the distillation process the Soju is then aged for a set amount of time. How long is the Soju aged you may ask? Well, the Soju is shockingly aged for 10 years before it has finished its distillation process and is ready for you to drink! 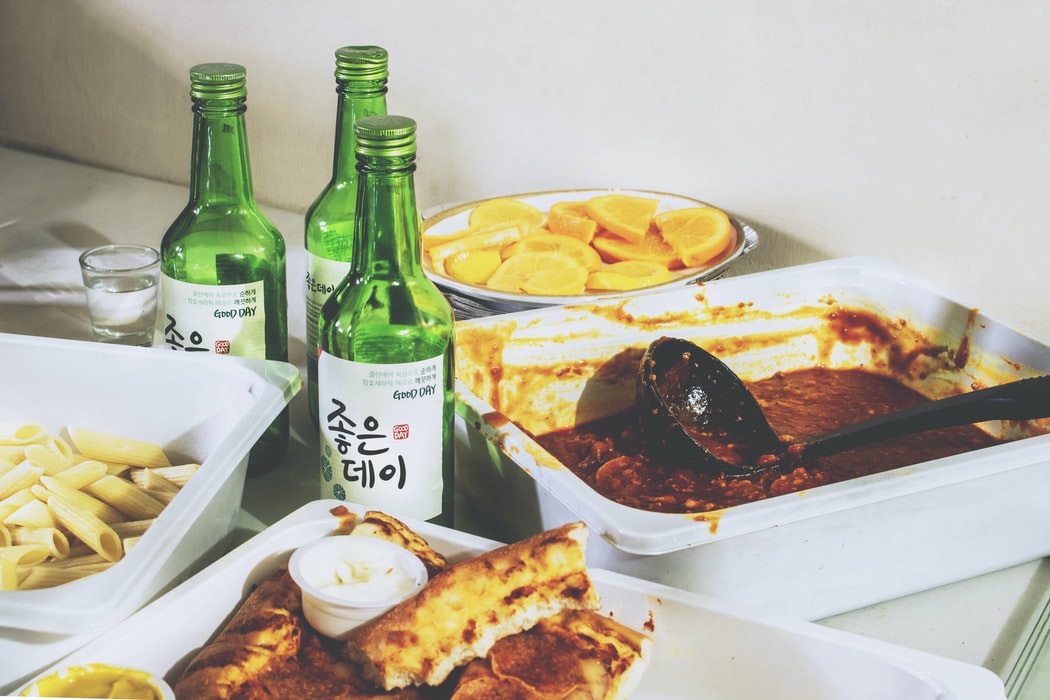 In sum there are clearly some big differences between Soju and Sake. Soju is Korean and Sake is Japanese. Soju is much stronger than Sake in its alcohol content. Both drinks can be made from rice, but Soju can be made from wheat, barely, tapioca, or even potatoes. We learned that although Sake is considered a rice “wine”, it is brewed more like a beer. And, contrastingly, Soju is distilled like a liquor. Sake has a much more subtle mild flavor that is paired better to sip with meals (primarily because of its alcohol content), while Soju is essentially a liquor like vodka, and more so meant to take shots. Whether you are travelling to South Korea, or you are on an adventure to Japan, we highly recommend you try out these drinks in their home countries. However, that does not mean that you are not able to still just go to your local sushi bar and try Sake, or find a Korean restaurant that serves Soju. Sometimes Japanese restaurants will even serve Sake and Soju and Korean restaurant will serve Soju and Sake! That is the best of both worlds. You can also always just go to a larger liquor store and go buy some Soju and Sake for yourself, because if you have yet to try either you definitely have to!