What to Mix With Coconut Rum

If you’re anything like me, you dream of mesmerizing remote islands full of white sand beaches and swaying palms under an impossibly blue sky. And what might I ask goes hand in hand with this alluring and seemingly far-off image that only comes to life in the back of your head? Well, rum and coconuts, of course. Since the dawn of time coconut rum has almost always been associated with a manner that is both tropical and refreshing and, while quite delicious alone with a few cubes of ice and a playful umbrella for pageantry, there are a host of cocktails that will blow both your mind and taste buds into orbit. Here are my favorites:

If you weren’t expecting the Pina colada to pop up on this list than you might have never really experienced coconut rum in any way, shape, or form. But that’s okay. Allow me to enlighten you. The Pina Colada is perhaps the most illustrious and classic tropical drink of the modern era. Don’t believe me? Just ask Rupert Holmes for Christ sake. He wrote a hit song about the cocktail in 1979 and people are still singing it today. But this cocktail was invented a little over 20 years before the air filled with these island tunes. In fact, the story goes that the Pina Colada hails from San Juan, Puerto Rico where it was created by Ramon Marrero at the Caribe Hilton in 1954 and the rest was, well, history.

To make it, you’ll need:

Take the ingredients and pour them into a shaker filled with ice. Shake your concoction well, pour, and garnish with a fresh slice of pineapple. Salud!

This is another awesome island inspired cocktail that isn’t as well known as the Pina Colada. Although Rum Punch has been around for quite a while, it hasn’t been able to develop the same clout as some of the other cocktails on this list. But that doesn’t mean it isn’t as delicious and refreshing. Best made with Blue Chair Bay Rum, this cocktail is smooth and tasty with little to no bit on the front side sip. It’s great for summer parties out by the pool or next to the crashing surf or in a dark room alone, you really can’t go wrong.

To make it, you’ll need (this recipe is in bulk which is recommended in a large pitcher):

Mix the coconut rum, orange juice, pineapple juice and ginger ale together. Strain over ice and add the grenadine as needed (you can start with a little less and add more as you go depending on how sweet you like your cocktail). Finally, serve with orange and/or lemon slices for garnish and let the sounds of the ocean take you far, far away.

Ever heard of the Kentucky Derby? Well, if you haven’t then you probably should get familiar with it because it has its own cocktail. And it’s a tasty one at that. But this particular cocktail has a little bit of a tropical twist on the original. Instead of bourbon which Kentucky remains infamous for, we are going to substitute coconut rum as the base spirit and take a turn for warmer skies and relaxing beaches. Not that the original doesn’t do the trick, but with summer approaching, the more tropical the better. 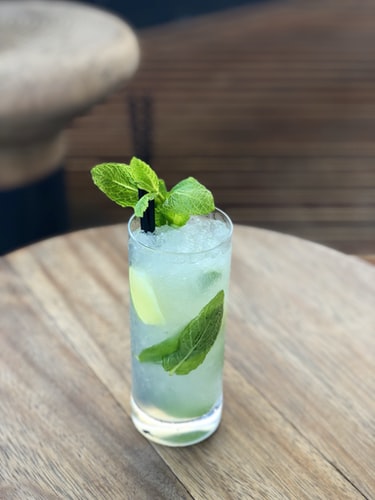 To make it, you’ll need:

Take the mint sprig and muddle along with the sugar to release the oils. Then add the coconut rum as well as the Orgeat to your Julep cup filled with crushed ice. Finally, float the dark rum on top and garnish with a few coconut flakes (if you have them) and mint sprigs. Sit back, relax, and watch the ponies go.

My first point of contact with the smooth and silky White Russian came when I first saw the classic film The Big Lebowski on T.V. “The Dude,” as the called him, sat around his apartment drinking White Russians all day so I asked myself what the fuss was all about. But after trying one of the original’s made with vodka, I never had to ask myself that question again. A great after dinner drink that carries with it a certain smooth sweetness, the White Russian proves it worth time and time again. So, one day, sitting out by the pool and just having had burgers and hot dogs, I craved something sweet in the form of a cocktail. But I had no vodka. All I had was Malibu Rum and all the other fixings of a White Russian. Immediately it dawned on me to peruse the internet and see if anyone had substituted the vodka with coconut rum and, what do you know? A Hawaiian White Russian!

Simply fill your rocks glass with ice and begin layering in your spirits in the order above to create the best consistency possible. After combining all of your spirits and simply syrup, mix the ingredients together using a cocktail spoon and then top your creation with coconut flakes. Drink immediately and don’t forget. Pinky up!

Although this list is somewhat short, I hope it sheds some light on the possibilities available using coconut rum as a base spirit. Most all cocktails have some wiggle room with what can be used as a spirt as long as you’re willing to be patient and get creative. Hope you enjoy my favorite coconut rum classics!