We’ll get to that in a minute.

After years of both negative stigma and the unfortunate side effect of being banned in the United States and throughout much of Europe, absinthe looks like it’s finally making a comeback. But it may be more accurate to say it never really went away. For decades, absinthe culture enjoyed a devoted but underground following, as equally steeped in the lore and customs of la fée verte as it was in the actual drink itself. And it’s a rich lore, full of symbolism, romanticism; and more than a little poetic flight of fancy.

But symbolism and romantic allure are one thing. Taste is another.

You don’t have to be a starving artist slaving away in a garret or idly passing your time in a Left Bank cafe in order to appreciate absinthe. In this guide, we’ll give you a few inventive twists on a 19th century favorite to help inspire you to make the best absinthe drinks at home. But first? Let’s see why absinthe was so controversial in the first place…

History And Controversy of Absinthe

While absinthe as a libation may be strongly rooted in the 19th century, its actual origin may come as a surprise. Initially developed in the late 18th century as a medicinal elixir by Dr Pierre Ordinaire and marketed by the Maison Pernod Fils distillery (the precursor to Pernod Ricard, makers of the eponymous Pernod liqueur,) absinthe as a recreational drink really didn’t catch on until the 1840s when French soldiers on leave from Algiers began demanding the libation en masse. What had begun as a preventative against malaria and dysentery soon became the buzz of Parisian culture; as synonymous with the city as the Notre-Dame cathedral or the Champs-Élysées. As the influence of Paris spread outward throughout Western Europe, the popularity of the liqueur followed suit to Belgium, Austria and Switzerland; and what had begun as a simple medicinal concoction of anise and fennel seed began to take on an entirely unintended—and highly potent form—with distilleries and saoons alike offering their own variations on the potable, with new ingredients being added to the fabled elixir, including mint, hyssop, cloves and lavender.

Wormwood is one of the fundamental base ingredients in absinthe, and what helps lend the spirit both its distinctive taste, odor and color. And one of the principal compounds found within the wormwood plant is an oily substance called thujone, which can induce a mild intoxication if consumed in small doses and what can be toxic if taken in sufficient quantities as a pure extract. When thujone interacts with a high spirit alcohol—as most absinthe was—the effect is said to potentially cause hallucinations and delirium until, in the words of Beatriz Williams, “one can no longer distinguish between history and reality.” And, in the wake of minor incidents of violence, murder and mental psychosis coinciding with massive absinthe consumption, its production and distribution was banned in the early 20th century in the United States and throughout much of Europe.

However, what’s often overlooked in the history of absinthe is the fact absinthe is not only meant for low quantity drinking, but diluted in water prior to its consumption (which produces a distinct and lovely opaque coloring referred to as the “louche.”) Or that many of the accused perpetrators suffered from acute alcoholism symptoms which were not entirely a result of absinthe consumption. Or the fact that the same worwood shrub used in the distillation of absinthe is also found in other liqueurs—such as vermouth and bitters.

Regardless, the ban remained in effect until the late 1990s, when European Union food and beverage laws were revised after sufficient medical evidence was revealed to find little or no threat to the general public. Production resumed throughout Europe, albeit on a limited scale; while in the U.S., various wormwood-free “faux-absinthes” were introduced to the market until 2007, when the ban on production, import and distribution of authentic absinthe was finally lifted.

But much like the initial buzz of the 1840s, what was once an esoteric fascination turned into a widespread clamoring from spirit connoisseurs internationally. Today’s absinthes are still relatively high octane—anywhere from 45 – 74% ABV; but are more often than not used as a base in cocktails and not a drink in and of itself. Nor is thujone poisoning to be found as much a medical threat as it was in the 19th century. As for the lore?

It’s still present. “Absinthe nights” have become a commonplace occurrence in both alternative nightclubs and mainstream lounges; proving once again that the romantic imagination doesn’t always distinguish between history and reality. 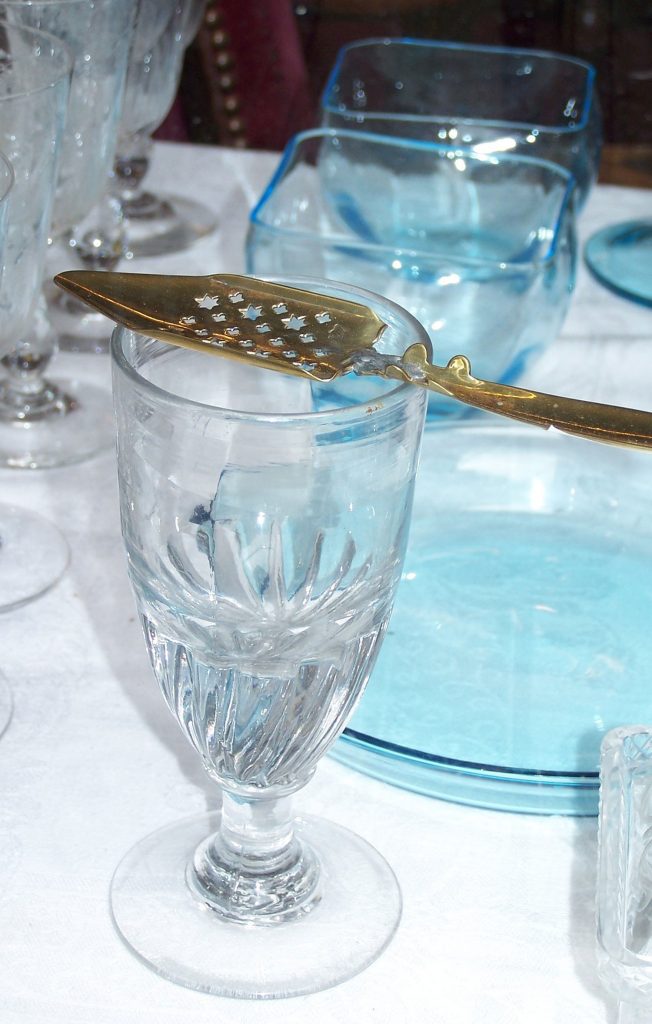 Recipes For The Best Absinthe Drinks

Place sugar in a cocktail glass. Add water and bitters and stir to dissolve. Add ice and whiskey. In a separate cocktail glass, add absinthe. Strain first glass into the second and stir. Add lemon peel and serve.

Death In The Afternoon

Add absinthe and water to a champagne glass and stir until opaque. Gradually pour wine, making sure it does not overflow. Serve with a reminder to sip slowly.