Apart from Feng Shui, Pandas, and of course the Great wall, China is also famous for its cuisines and drinks. China is the first country that invented alcohol. It is evident from a large number of potteries and wine vessels discovered and recorded in the ruins of Shandong of Dawenkou culture. It dates back to around 5000 years when the earliest versions got prepared from food grains like millet, rice, and broomcorn. Mao-tai is known as national liquor in China and one of the most famous liquors across the world. Alcohol is referred to as the water of history in China. The discovery of the oldest known alcohol prepared from wheat was in China.

As the Chinese are getting richer, their taste for liquor is changing. Red wine ranked top to become the choice of drink among Chinese followed by rice liquors and whiskey. Alcohol is the homophone of long-lasting that’s why people used to drink it for everlasting friendships, happiness, and well-being. Chinese has even distinguished drinks for their different festivals. They drink sweet sedge wine during Dragon Boat Festival, chrysanthemum wine during Double Nine Festival and Nianjiu for the spring festival usually to celebrate Chinese New Year. A few of the top drinks that every Chinese love to gulp are as follows:

Baijiu is among the most consumed alcoholic beverages in China which gets prepared from grains. The literal meaning of Baijiu is ‘white alcohol’ or spirits. The alcohol is prepared using fermented sorghum and forms a clear liquid. The taste is too intense and too concentrated forms may burn the soft palate. It is the tradition to serve Baijiu neat at room temperatures with meals and not all itself.

Huangjiu is among the oldest drinks of the world. It is a typical Chinese kind of alcohol usually known as yellow wine. Huangjiu gets prepared from water, millet, sorghum, wheat, rice, and jiuqu. It has an exclusive blend of ingredients that contains dozens of amino acids that are essential for the human body. It tastes mellow and sweet and may also find uses in cooking. A few yellow wines that age for over 20 years are available as top products.

In China the Western Zhou dynasty holds the first records of using the Snake Wine. It is an alcoholic beverage produced by brewing a whole snake in grain alcohol or rice wine. As per ancient belief, distilling snake’s essence into wine cures everything from hair loss to rheumatism. The snake venom dissolves in the liquor to become harmless for the drinker. Chinese generally gulp it in small shot glasses due to the high alcohol percentage in it.

It is the most recognized Chinese beer in the world. It contains a lager having high malt flavor and a hint of hops. Tsingtao isn’t difficult to drink, and it does not leave a bitter aftertaste. Production of Tsintao beer for the first time was in the seaside city of Qingdao. An ingredient used in the preparation of this beer need special mention as it is the spring water from the Shangdong province, a mountain area known for its water purity. 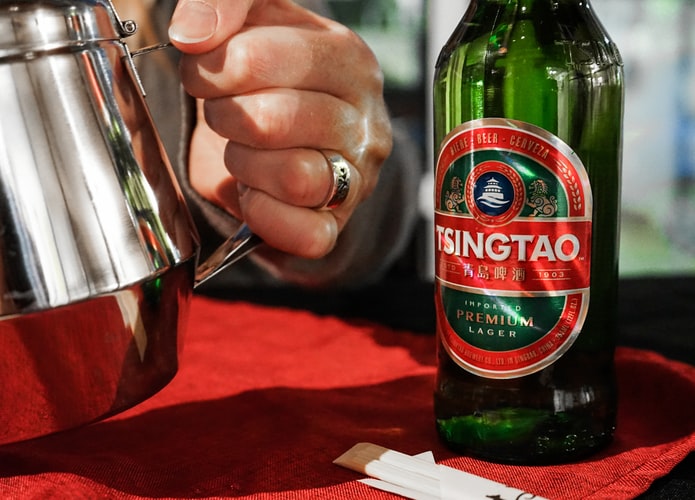 Kaoliang Wine is stout, refined liquor that devised at Dazhigu, in east Taiwan area. It is known as Sorghum wine or Gaoliang wine made by fermenting Sorghum. It tastes like rice powder, hot pepper, and vanilla pudding along with the unflavored white spirit.

Choujiu is an ancient variety of Chinese drinks. The alcoholic drink finds use of glutinous rice in its preparation. It is thick and milky white usually comparable with Jade. The drink is prepared with the fermented combination of fungus Aspergillus oryzae that converts starch from rice into yeast and fermentable sugar. It helps to turn sugar in alcohol. It is popular among Chinese who traditionally drink it on several occasions.

Green Dragon is a gin-based cocktail, and like many others, it has a bit of acquired taste. Apart from the herbal flavor of junipers the Green Dragon has crème de menthe and uses Kummel and orange bitters that marry an ingredient to blend the two dominant flavors. It results in a strong herbal flavor due to kummel, caraway seeds, and fennel. It tastes sweet with notes of anise and black licorice.

Delta Heat Cocktail is delicious and fruity, and features notes of mangoes, orange, and peach along with honeydew. It is bright cheerful chartreuse and visually pleasing too. The drink is relatively sweet while Midori takes the edge off brandy which brings out mango and peach notes. It is an enjoyable, complex flavor.

The fresh blood orange juice mixed in with margarita tastes delicious. The bright tart flavors of blood orange make it a brilliant color cocktail which is very refreshing. Blood oranges taste similar to navel orange with stunningly colored flesh and a hint of berries. There are new versions as well that incorporates bitters in a margarita for the additional flavorful layer. The fascinating drink having blood orange as its base is also better to shake with sprigs of sage that add a pleasant herbal note to it!

The Jadestone holds a great value in Chinese culture. It symbolizes virtues like sincerity, justice, wisdom, loyalty, and purity. Chinese prepares the drink mixes in several ways and with different ingredients. One of its version features crème de menthe, rum and lime. It adds some Cointreau orange liqueur to change the flavor profile. The drink becomes citrus having hints of caramel and mint. It has a refreshing taste that is neither too tart nor too sweet.

The drinking culture is present everywhere in China, during dinners at home, with friends and family, holidays, celebrations, casual get together, night outs, and business meetings. It is entirely different from western countries. Drinking styles are also a mix of conventional, traditional recipes and the modern and innovative techniques that the Chinese are now following. So you can say it is a mix of New and the Old world. There is a list of drinks and cocktails that Chinese love to enjoy at every occasion, the menu here includes ten most celebrated drinks. Do not forget to read about their drinking etiquettes too!