For one of the most iconic cocktails around, the martini is surprisingly difficult to define. Dry, wet, dirty, filthy, shaken or stirred, twist of lemon, olive, onion… is there a “right” way to make a martini? It’s really drinkers choice, and what constitutes the proper composition is as nebulous as the history of the cocktail itself.

There are three main theories regarding the birth of the martini. One places it beginning in Martinez, California in the middle of the Gold Rush, when a miner walked into a bar with a nugget of gold and ask the bartender for Champagne to celebrate his findings. Not having any on hand, the bartender mixed him a concoction composed of Old Tom gin, sweet vermouth, maraschino liqueur, lemon, and a couple dashes of bitters. Though a far cry from the modern martini, the Martinez as it was called, is considered the grandfather of the modern martini.

A second theory is the drink followed the trend of the day and was simply named after one of the ingredients, Martini-Rossi vermouth. The third most common theory is that the drink was invented at the Knickerbocker Hotel in New York in the 20th century by a bartender named Martini di Arma di Taggia. His recipe was equal parts gin and dry vermouth with a dash of orange bitters, which is closer to the modern iteration of the cocktail than the Martinez, yet with considerably more vermouth than what is standard today.

Over time, martinis have become dryer, or with less vermouth. Originally, a martini was more of a 1:1 gin to vermouth composition. The more vermouth, the “wetter” a martini is considered to be. A 1:1 composition today would be considered “extremely wet”; 3:1 is a balanced middle ground and most likely what you’ll get if you order at the bar; 4:1 or less is considered “dry.” Again, it comes down to preference (which will need to be communicated to your bartender) and what aspect of your cocktail you want to enjoy the most. Are you looking to celebrate the flavor of your gin, or are you more about reveling in the qualities of your vermouth? Noel Coward is famously quoted as saying the perfect martini is “filling a glass with gin, then waving it in the general direction of Italy.” But to each his own.

Which brings us to our next point of debate. What about the signature James Bond vodka martini? By definition, a martini is a gin-based drink (a vodka martini or any other type must be specified to your bartender.) Historians speculate that the rise of vodka’s popularity has more to do with a marketing push in the 1970’s and less to do with the MI6 agent, who in the Ian Fleming novels reportedly drank a vodka martini only once. Add to that his insistence that his martini be shaken, not stirred. Agains, purists protest, and there are a few reasons for this—

Shaking causes tiny bits of ice to chip off into the vodka or gin, which will melt faster and dilute the mixture, giving the martini a softer flavor. Shaken martinis are also often slightly cloudy in appearance due to the incorporation of air bubbles which affects the texture and mouthfeel of the drink. Stirred martinis allow for gentler contact and therefore less dilution from the ice and keep the flavors pure, so to speak, but it’s down to the drinker to decide what they like best. 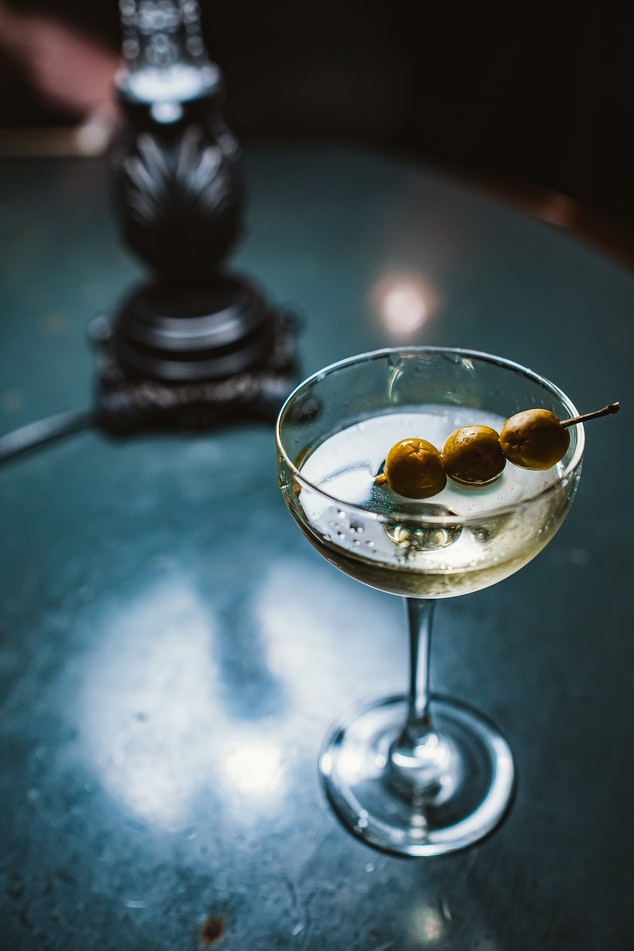 Aside from preference, a few key details must be observed when crafting a martini that you consider ideal. Experts say the perfect martini, whatever you choose to make it with, must come down to four key things:

And we haven’t even talked garnishes yet. The garnish you use is an important thing to take into account, especially with twists. A twist is a slice of citrus rind twisted so that the aromatic oils are released and fall into your cocktail. The flavor profile of your gin will determine if you should use lime, lemon, or orange for optimal taste. But what about the Gibson martini which uses a pickled onion for flavor? We know that olives are commonly used, but including the juice or brine from them will render the drink “dirty” or “filthy” depending on the amount added. Again, it’s all about personal preference and what compliments your spirits, but a rule of thumb to follow is use twists for bright citrus, onions for earthy undertones, olives for salty brininess.

Still, what is a “traditional” martini? There has to be a baseline for so much customization to exist. This is what we’ve come up with:

A “clean” gin that leans more to the juniper side and has less sweet or floral notes is going to be your best base. A dry vermouth, often French, is better for a starting point. (If you prefer a sweeter taste, choose Italian vermouth.) Top with either an olive, lemon twist, or both, and sip perfection.

For beginners, try the following and adjust to your preference.