When in search of the perfect beer, a lot of beer enthusiasts scoff at the idea of the more sweet versions being marketed to the casual consumer. There are huge campaigns right now in the works, and they are aimed towards bolder and more innovative flavors. Granted some work better than others, but the buzz words that surround these beers have pushed the usual ‘crisp’ and ‘bold’ words to second tier. Below is a good list of why sweet beer is here to stay, and more so on why it’s so awesome.

This is a light apple, cherry, and cranberry ale that has only 4% ABV to make it dangerously close to being a poor man’s Kool-Aid. By comparison the cheap and sweet wine known as Boones Farm, wildly infamously beloved by casual drinkers worldwide, has a higher ABV by a mile. Even considering the aforementioned, New Glarus Serendipity is a great take on how to balance of fruity flavors with the taste of beer without making it bitter or overpowering. The result is a bit of a snappy aftertaste that will make most drinkers forget that the root of this concoction came about by accident.

Next up is a more powerful fruit beer, with Epic Brewing Brainless on Peaches tasting more like an early adopter of fruit and beer, as in it is sans the sweetness. A peach by itself is not really one of the sweeter fruits, so the genius of this beer is that in its 22 ounce glory it tip toes the line between being tasty for a regular beer drinker and a casual one. The base of the beer is an award winning ale with peach puree added, so in essence it isn’t as complex as some people might think. Although not really sweet, the dry spicy taste melts in the mouth all so well, and is a favorite of many drinkers. 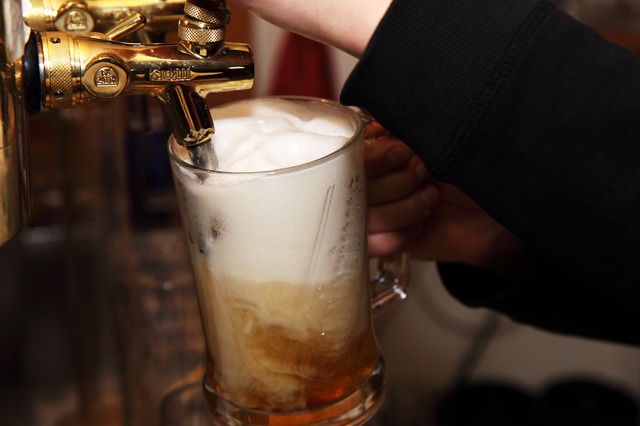 If you’re anything like me, then when you hear pumpkin most don’t automatically think fruit. Then again that puts you at the bottom populace in intelligence, but fret not because I’m sitting right next to you! This is an amazing beer from Almanac that came into birth in the year 2010, with an emphasis on fresh rather than manufactured. The previous Epic Brewing Brainless on Peaches uses a puree, while this beer uses organic heirloom aged pumpkins. What could be somewhat of a weird flavor is offset by the brilliant inclusion of toffee, giving it a rich and thick sweetness. This is one of the more naturally sweet beers on the list, and one that will probably have the most fans when compared to side by side. Don’t miss out on this one, it is a keeper in every way.

The absolutely weird design on the bottle may turn most consumers away, but if ignored this is a pretty tasty beer to have by itself. This is a slightly bitter grapefruit beer throws in some light mango and apricot flavors and does a good job of being juicy without being too sweet. It’s an interesting take, as grapefruit by itself isn’t a widely popular fruit. It blends in so well with this beer that a lot of people will not realize they are drinking a beer, making it another winner for newbies. Out of all the beers on the list this one is the most surprising with its flavors, but considering Ballast Point’s history it shouldn’t come as a surprise to anyone familiar with the brand name.

Lastly, this is one of the more ‘tradition’ fruit beers, playing off of the flavors of blueberries and blackberries. Granted, that’s one of the easier choices to make a base with wine, but with beer there is a fine line. Dogfish Head Black & Blue has impeccable bottle art, and comes off like a really strong wine. This is actually not a bad mix, allowing it to be served alongside good wine at a dinner table, with barely anyone noticing any major difference between the two. In many cases this sweet beer is better than some of the more traditional wines, with the carbonation literally dancing on your tongue and cutting through with the perfect amount of acidity. This is one of the better surprises on the list, and worth a taste.