Back To Malibu: A Guide To Malibu Rum Blends

When it comes to the world of rum, the very product has gone through so many iterations it’s virtually unrecognizable. Unlike other spirits, rum’s singular diversity has been exploited to an almost absurd degree with bizarre and surreally flavored adaptations produced seemingly every week. Coffee flavored rum? Check. Sweet potato flavored rum? Check. Ghost pepper infused rum? Check. Salt water taffy flavored rum? Not yet, but give it a year or two.

Despite this relative multiplicity of artificially flavored rums on the market, there are exceptions to the merely novel or trendy. Coconut rum being the most pertinent example.You’d imagine with over 70 different varieties available on the market, there would be some form of standard quality for coconut flavored rum to adhere to, even if only an informal one. But there isn’t. Some are cloyingly sweet. Others are so subtle you can barely detect the flavoring. But when it comes to consistency, Malibu rum stands out as one of the few brands that are wholly reliable. And for a brand that currently has over eight different varieties, that’s no small feat.

Bu just how did Malibu rum transform itself from a low-proof cocktail ingredient into one of the most iconic rum blends currently available?

When MTV finally cancelled Jersey Shore in 2012, few mourned its absence. Derided by critics as proof of the decline of Western entertainment (who appeared oblivious to the ubiquitous popularity of the Jerry Springer Show years prior) the show enjoyed a small but vocal following of devotees who viewed the phenomenon as both a spectacle and a lifestyle. So much so, that when Jersey Shore cast member Vinny Guadagnino teamed up with Pernod Ricard (the distributors of Malibu) to launch a marketing campaign dubbed the “#Malibro movement” on Twitter and Instagram in 2016, Malibu rum saw its popularity spike in an otherwise unrecognized market—25-35 year old males.

“The Malibro personifies someone who has a colorful personality and likes to party,” Guadagnino told Fortune magazine at the time. “Forget the social stigmas that go along with drinking a fruity cocktail. I want to see everyone this summer enjoying a sick Malibu drink.”

While rum itself has frequently been marketed for astutely masculine sensibilities (witness the the recent “Untameable” campaign of Bacardi and the very packaging of Captain Morgan itself,) Malibu has often been derided as merely a cocktail mixer—somehow less than worthy of “serious” attention of its competitors.

When Is A Rum Actually Not A Rum?

Technically, Malibu is a liqueur and not a “liquor.” The distinction is actually quite specific. Liqueurs tend to be sweeter and flavored with both natural and artificial flavorings—in the case of Malibu, coconut, passion fruit and mango being just three out of many. They also tend to be lower in alcohol content. Malibu is approximately 21 percent alcohol, or 42 proof, in comparison with the average rum; which is roughly 40 percent alcohol, or 80 proof.

How did this confusion occur? It’s an interesting story. Malibu was first introduced to the market in 1982 by International Distillers & Vintners, who developed Bailey’s Irish Cream eight years earlier. At the time, there was a push from many bartenders and establishments to simplify the process of cocktail making; in particular, the sweeter cocktails in vogue at the time. Both Malibu and Bailey’s were developed to do just that; with Malibu designed for use in piña coladas and Bailey’s designed for Irish coffee. However, tastes change. While piña coladas grew less fashionable, the public craving for a coconut flavored rum remained constant—even if Malibu offerings didn’t. Malibu not only grew more sophisticated, but also more diverse in their offerings. So diverse, that when French distributor Pernod Ricard purchased the brand in 2005, they insisted on marketing it as a “flavored rum”—an appellation allowed by French law.

But as any bartender will emphasize, Malibu is not a rum. And indeed, in the U.S., marketing campaigns are quick to emphasize that fact; instead touting the product as a “flavored rum blend.”

Strain all ingredients into a cocktail shaker filled with ice. Shake vigorously until chilled and strain into a chilled glass with ice. Garnish with pineapple and serve. 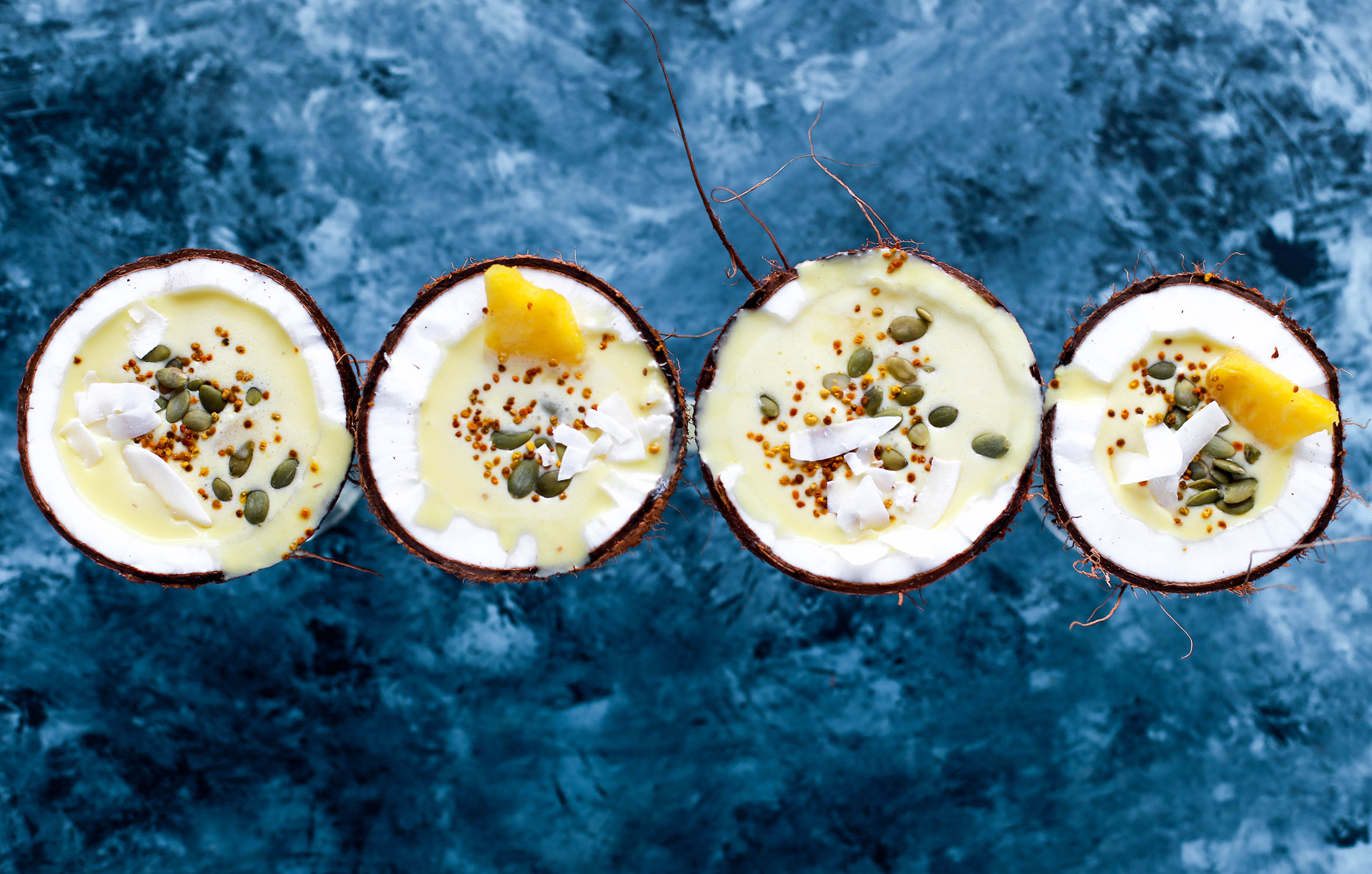 In an ice filled shaker, add raspberries and Malibu. Shake until well chilled and the liquid is a dull red. Double strain into a chilled champagne flute. Top with sparkling wine and serve.

In an ice filled shaker, add Malibu, whiskey and grapefruit juice. Shake until well chilled. Strain into a chilled high glass. Slowly add lemon soda and grenadine until a deep pink. Stir. Top with sparkling wine and garnish with cherries before serving.