For the uninitiated, Vodka is a neutral spirit, and it does not contain any flavor. It should not, though some do have a little amount of creaminess in them. Vodka can be made from potatoes, sugar, bread, barley, molasses, and most commonly wheat.

In contrast with the Vodka made from wheat, the potato Vodka tastes notably different and feels very heavy and dense. It is all about texture when it comes to the question of potato Vodkas. A good quality Vodka sourced from premium potatoes feels very voluptuous and satisfying in the taste buds. However, potatoes are not a good choice for base ingredients as the have many impurities in them, which are released during distillation. Good potato Vodkas are pretty hard to manufacture and come across.

The distillation process is practically identical for grain and potato Vodkas. The process starts with potatoes or with a wort (the unfermented liquid extracted from the mashing cycle that occurs during the brewing) made from grain and water. The distilling machine adds synthetic enzymes and increases the temperature to break down the starches in the mixture and eventually converting them to sugars. These sugars ferment into alcohol, which is further distilled and filtered to concentrate the mixture and eliminate the impurities. The resultant is a high-alcohol spirit which is diluted proportionately to reduce to a drinkable strength. 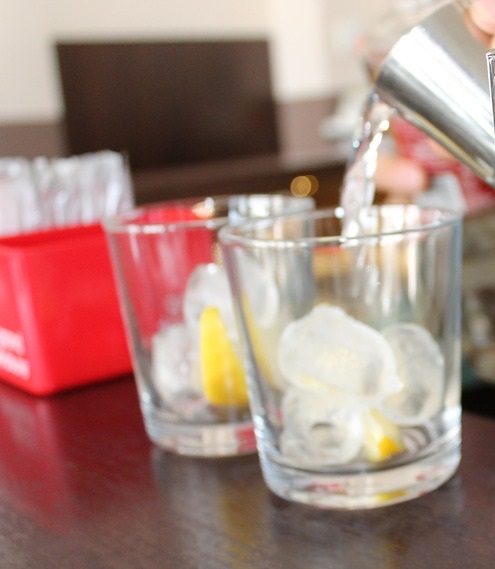 The brand won many awards and recognition worldwide and contains ABV of 40% (US proof 80). It is made from high-quality English potatoes and developed from seed to product in the UK. Its clean and crisp flavor and smooth sweet notes are the results of the traditional distillation process. The Chase distillery is Britain’s first single-estate distillery and was established in 2008 in Herefordshire. It was run by William Chase, who also incorporated Tyrrells (Crisps). This distillery is also world famous for housing Europe’s tallest rectification column. According to February-2016 sales report, they were selling ten thousand bottles of spirits weekly.

The balanced Vodka brand comes with smooth flavors. It is manufactured by William Grant and Sons who set up a distillery in Iceland’s Borgames and began production in 2005. It comes with an ABV of 40% and is filtered through four-thousand-year-old arctic lava rocks, sufficing the requirement for demineralization. Reyka means smoke in the Icelandic language. This label has won many accolades including the Vodka Trophy in the International Wine and Spirit Competition in 2011. Drink Spirits have bestowed Reyka the honor of Top ten Vodkas.

It is a clear drink that comes with an ABV of 40%. It is marketed in a distinctly tall bottle with a unique front design carrying a fine print about the nitty-gritty of the complicated manufacturing process. The Earthy smell of grain and potatoes disperses in the air as soon as one opens the bottle. The taste is not overwhelming, and a soft consistency can be felt in each sip. This award-winning Vodka is obtained from Pennsylvania potatoes employing a think-local ideology. The potatoes are grown in Somerset, Butler, and Schullykill counties. This brand is manufactured by Pennsylvania Pure Distilleries (LLC), and the distillery is housed at Shaler township’s Glenshaw. The small-batch Vodka was first introduced in 2010 in Ohio, New York, Connecticut, Rhode Island, Illinois, and California. The Pennsylvania Pure Distilleries was founded by two men, namely, Prentiss Orr and Barry Young. The Spirit Journal ranked this brand the twenty-second ranked liquor on Earth and the highest ranking Vodka on the list.

It has a smooth, full-bodied flavor and comes with an ABV of 40%. Potatoes, wheat, and malted barley are the base ingredients for this Vodka. The multiple flavors give the drinker a heavenly and palatable experience. It is manufactured by the Leopard Bros, a family-owned distillery in Colorado’s Denver.

This option is a finely crafted premium Vodka brand in the US founded by “Big Jim” Myerson and comes with an ABV of 40%. It is made from the most delicious and gluten-free Russet Burbank potatoes that grow in Idaho only. This brand is certified non-GMO and uses natural waters only. When the snow deposited at the peaks of Grand Tetons Mountains melt; it flows through two hundred feet of porous, volcanic rock before reaching the two hundred feet well of the Snake River Aquifer. Blue Vodka is made in four column apparatus via fractal distillation, which removes the impurities at a micro level. This neutral spirit does not contain any additives, citric acids, or glycerides usually found in other Vodkas. While most Vodkas are filtered only thrice, Blue Ice is filtered as much as five times for final clarification. Fine charcoal, filter press, garnet or crystal, travertine, and sub-microns are used for this purpose.

It has an almost blue tint until someone opens the bottle. This brand of Vodka is an intrinsic beverage with virtually no impurities. Only locally grown potatoes and ten-thousand-year-old Alaska glacier water are used for the manufacturing process. It has got a crisp taste with a smooth finish. It is manufactured by the Alaska Distillery and comes with an ABV of 40%. Traceable amount of meringue can be found at the time of drinking.

The brand has won one double gold, three gold, and two silver medals between 2006 and 2011 in the San Francisco World Spirits Competition. This single-ingredient Vodka, which has an ABV of 40%, is distilled four times from potatoes. It is manufactured by Podlaska Wytwórnia Wódek Polmos based in Poland’s Siedlce. Forty (seven pounds approximately) prized potatoes and artesian water are used to make every bottle of Chopin. This Vodka is named after the famous Polish romantic composer Frédéric Chopin and every bottle the distillery produces bears his signature. This brand was first introduced in Poland and US in 1992 and 1997 respectively.

It is a clear beverage which has no overwhelming flavors and has an ABV of 40%. It can be mixed with other drinks pretty easily. The bottle is distinctly tall with a slim neck and a jet black top. In contrast with other Vodkas of this class, Stawski does not have an oily texture. A smooth taste with citrus notes is left on the taste buds after every drink. It is made from locally sourced potatoes of Poland and distilled at Komers production plant in Goszyn.

This vodka is manufactured by the Idaho based Grand Teton Distilleries and won the distinction of USA’s number one Vodka. Two double gold medals were bestowed to Grand Teton at the San Francisco World Spirits Competitions between 2013 and 2014. This brand is reputed worldwide for its bright aromas, smooth body, and nuanced flavors. Lea Beckett incorporated the Grand Teton Vodka (Inc) in 2012 and set up the brewing plant at Driggs, near the water source. The water used is drawn from the Snake River watershed of the Teton Mountain range. This vodka is prepared using a proprietary fermentation process and comes with an ABV of 40%. After fermentation, it is passed through a pot and column still and then filtered with charcoal and garnet crystals. The Vodka is distilled as much as twenty times.

The vodka is made from seven different varieties of Swedish potatoes to obtain the best flavor possible and comes with an ABV of 40%. It is single-distilled spirit, hence, the rich original flavor is retained in the process. It has got a clear color with a oily consistency that can be evenly felt by the taste buds. Vanilla and cocoa undertones are present in the drink. It was developed by the master blender Börje Karlsson. The brewing plant is located at the Bjäre peninsula in Skåne.

There exist quite a few popular misconceptions about the differences between potato and grain Vodkas among the first time drinkers. To begin with, grain Vodka is typically cleaner, while potato Vodkas carry a viscous and a little creamy or oily texture. Potato Vodkas are usually somewhat sweet, and this attribute is an exception rather than a norm in cases of grain Vodkas. Potato Vodkas are slightly more expensive than grain ones because of the large quantity of best quality potatoes required in the preparation. Grain Vodkas are less textured and easy to pair with food, especially with ethnic Polish or Russian cuisine.