How to Drink Whiskey – A Beginner’s Guide

Though whiskey was initially known as the aqua vitae or the water of vitality, i.e., as a medicinal or therapeutic substance; soon it became popular and earned the honor of most famous alcoholic drinks in the world. It is said to be first distilled in the 1400s in Scotland. It became the drink of the mass in Ireland and the UK as well and contributed around one-third to half of the national revenue through taxation.

According to many historians, it was colonization which was the primary driving force that made the drink cross the Atlantic. George Washington was known to say that whiskey was his favorite vice, and even a distillery at Mount Vernon was started by him, which became one of the largest in the US eventually. That distillery still makes whiskey to date.

Clark Gable, Winston Churchill (often with a fine cigar), Mark Twain; they were all great admirers of the whiskey. Despite having a turbulent history (refer to the chapter of Whiskey Rebellion in world history books), whiskey continues to reign as an ordinary man’s drink for centuries.

How to Find Your Favorite Whiskey?

To thoroughly enjoy this liquor, one first requires to know some fundamentals of the spirit itself; such as different styles, alcohol levels, how to select a bottle, etc. Technically speaking, whiskey is an alcoholic beverage distilled from fermented grains and made to age in wooden casks, typically made of oak.

However, visiting a bar or a liquor shop and cherry-picking from all the available whiskeys can be no doubt intimidating. There are a plethora of jargons like rye whiskey, single malt, blended whiskey, etc. that are supposed to be studied well in advance.

Perhaps, the least complicated way of distinguishing whiskeys is by their country of origin, and then further breaking down into various sub-categories that provide a little more detail for the product. Of course, these are pretty generic terms, and one can spot quite a few other genres out there, the following list is meant to be handy in most situations.

It happens to be sweeter when compared to other whiskeys. These whiskeys must be distilled in the US, and they should be made to age in barrels (typically for two years, though not always) to qualify as whiskey. It is further classified into the following sub-categories.

It is distilled from a minimum of 51% corn.

It is distilled from a minimum of 51% rye.

It is necessarily a bourbon distilled in Tennessee and filtered using charcoal.

It happens to contain earthy and smoky flavor profiles. It is obtained primarily from barley, distilled in Scotland, and made to age for at least three years. It can be further broken down into the following sub-categories.

It is necessarily a blend of one, two, or more Scotch whiskeys.

It is distilled using a single distillery and obtained from malted barley.

It happens to possess a light-bodied profile but tends to be stronger than the Canadian whiskey. It is distilled in Ireland and made to age for at least three years.

It happens to be fruity and light-bodied, distilled in Canada, and made to age for at least three years. They are usually blended whiskeys.

The label on whiskey bottles contains all the necessary information including the alcohol content. It can either be written explicitly as a percentage or as a proof. To obtain the required percentage from a given proof, one needs to divide the latter in half simply. For instance, a hundred-proof whiskey is 50% alcohol by volume (ABV). Typically the ABV can be found in the range of 40% to 60%, the former being more common.

The wisest way of selecting a whiskey, according to many connoisseurs, is to zero in on a particular style and then to try out a couple of variations from that style. For instance, one can start with a cheap bottle (ten to fifteen US dollars), then proceed to a moderately priced one (twenty to thirty-five bucks), and finally graduating with an expensive one (thirty to hundred bucks) and can compare them. For the uninitiated, the most expensive one among the lot will typically be smoother and will have a somewhat less burn. It is because of the fact that the longer it is aged, the more its harshness gets reduced by the wood. When someone tastes a bourbon with an ABV of 45%, and then one containing an ABV of 50%, that person will notice the 5% difference.

One only needs time and patience so that the taste buds can mature, and a person will be able to register (even if partially) successfully various styles and flavors of whiskey in the long run. A suggested starting style is Irish or Canadian because they are fruitier and a tad lighter. From there, one can proceed to the American ones, which typically contain somewhat more variety and flavor. Finally, Scotch should be reserved for graduation, as it has the most unique flavor and the harshest for somebody without any considerable experience in whiskeys.

Drinking whiskey in a Styrofoam or plastic cup is fine! Having said so, there are quite a few vessels that are considered better than others for maximizing the flavor. Also, some glasses do look a lot better than others, and presentation does make a difference. The drinking vessel plays an instrumental role in amplifying the experience and the sensation of the ritual. 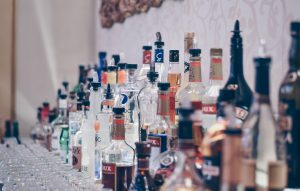 Whiskeys should always be served in a glass, as other materials can alter the flavor. Many veterans pour the drink in a rocks glass, also called as a lowball or Old Fashioned glass. It is necessarily a short tumbler that measures around six to ten fluidic ounce.

One can shop for some specialty whiskey glasses. These glasses are tulip-shaped and concentrate all the flavors and vapors and allow one to nose the drink. Or a person may choose to drink it from a tin cup and can feel like old school. Back in the 1800s USA, miners used to drink their whiskey from a tin cup as glass was extremely fragile, and transporting it over the mountains by means of carriage was risky. Tin was far cheaper, and though it made the flavor of the drink somewhat tinny, the experience is still worth considering. The rigidity of a tin cup also makes it an ideal candidate for using outdoors.

Many people will provide with a truckload of suggestions about how to drink whiskey in a proper manner, which whiskeys to try, and how much one should shell out from the pocket. These suggestions need not be taken seriously. At the end of the day, one should drink what the person wants, and how that person wishes to drink that beverage. These should be taken as guidelines and not rules.